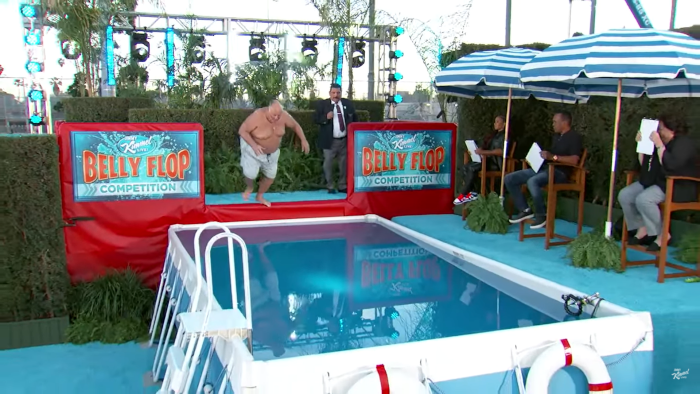 During These Trying Times, Why Not Watch People Belly Flop On 'Jimmy Kimmel: Live'?

Let me start by saying that I laughed during this entire segment. Not a “cringe” laugh, as the kids would say. I wasn’t embarrassed for anyone. For something I was sure I would be laughing at, I spent most of the time laughing with it. Regular people, bellyflopping into a pool for Jimmy Kimmel’s amusement. I was sure there would be something to make me uncomfortable. I could not have been more wrong.

There’s something truly joyous about the whole segment. Kimmel’s cousin Sal introduces several people, picked off the street, that will bellyflop for three judges (including a hilarious Sugar Ray Leonard). Every contestant is more different than the last. Yet, there is one great equalizer: the bellyflop. Status, looks, age, all of that goes out the window. What matters is people going tummy first into a pool in sunny Los Angeles.

While the contestants each bring their own flair to the situation, Kimmel is really at his best here. He’s like a kid in a candy store. His laughter feels sincere and silly. His demeanor smacks of “can you believe I get paid for this” in the best way. There’s no judgment, just fun. I know I keep harping on that, but I was nervous. It would be so easy to take an idea like this and use it as a chance to talk down to people. Instead, everyone is on the same page. Everyone is in on the joke and is having just as much fun as Jimmy is.

So yeah, watch the hell out of this. Watch it twice. It’s ten minutes long but honestly, it could have been longer. I’m currently pulling my hair out, wondering what each day will bring as we sink deeper and deeper into climate and society-induced cataclysm. But hey, why think about all that when we can watch Guillermo rub the belly of an enthusiastic Brooklyn man for good luck?


← Zack Snyder Announces Some Casting News For His Next Film, 'Rebel Moon' | Anti-Vaxx Truckers Blocking Canada and The GOP Euphemizing Away a Coup →