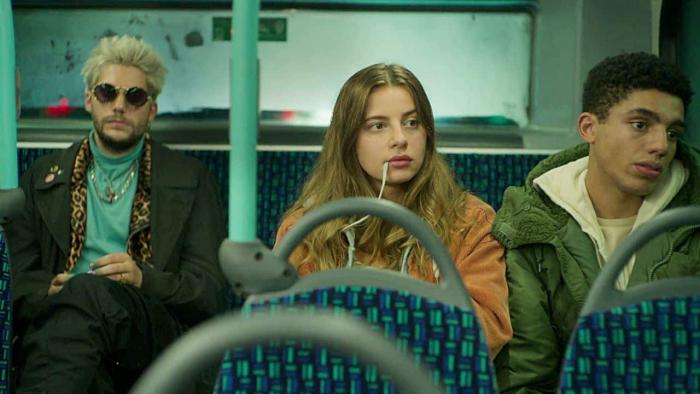 Aside from the shockingly well-written Andor, fantasy and science fiction series have been sorely lacking in recent months. House of the Dragon and Rings of Power haven’t been able to level up to their namesakes, and this is only part of the reason the under-the-radar Netflix series The Bastard Son and the Devil Himself works so well — not only is its source material not as well known but it also arrives out of the gate fully formed and understands how to get its hooks in as viewers take the first step into this universe of dark and potent magic.

The opening moments are enough to throw viewers off balance. Introduced with a jaunty pop mix, two characters drive through the countryside, encountering a fairytale-style home, one whose chimney is billowing red mist. The characters, two hunters, steer away the human police who have come to investigate, only to find two children alive and their mother dead, seemingly by suicide.

This is our entry point, the brief but necessary prologue that sets up the rest of the season, eight episodes in total, as we see Nathan, a baby when first introduced, grow into young adulthood (and played by Jay Lycurgo). The no-nonsense Ceelia (Karen Connell) presses him about violent urges and tests his mental fortitude as well as physical capabilities as she watches inflicted cuts on his hands heal themselves. Nathan is, at first blush, a normal 16-year-old. Based on the YA novel Half-Bad by Sally Green, we know it was never going to play it that simple — Nathan is the son of a notorious blood witch who was responsible for a deadly massacre.

Those monitoring him, The Council of Fairborn Witches, fear that when he turns 17 and receives his powers, he’ll also inherit his father’s blood thirst.

Despite all of this, it’s not the sprawling and detailed plot that’s the most enticing draw, although it certainly helps to keep the story fast-paced and fully fleshed out. Instead, it’s in how immediately we care for the characters and their relationships, the invigorating direction that takes series like Skins and The Magicians and marries their best bits and an atmosphere of dread, a warning that despite the magic of the world, there’s little whimsy to be found. Magic is something that’s been reined in, contained, and built with practices and customs that limit it to what the highly esteemed and privileged deem acceptable.

It’s a fascinating angle to take, especially in young adult fiction, with narrative threads following the characters as they deal with their sexuality, young love, abandonment, loss, and their place in the world. The Blood Witches, as we come to meet more of them, are ruthless in the belief of their own higher power, while the Council is rigid and power-hungry, ready to sacrifice anyone who is in their way of achieving their goals. While the adults are given plenty of interesting moments — Connell’s Ceelia is a particular highlight as the layers of her character are peeled back — it’s Nathan, his half-sister Jessica (Isobel Jesper Jones,) Annalise (Nadia Parkers,) and Gabriel (Emilien Vekemans) whose stories are best and most thoroughly told.

Annalise, Nathan’s initial love interest, isn’t just dealing with the fallout of dating a boy her father won’t agree with, she’s also dealing with the horrifying revelation that her powers have devastating consequences. How fitting is it for a teenage girl enduring losses and familial betrayal to be given a gift where she can pull people and objects apart from their very seams, her anger and beguiling emotion bubbling up into something unfathomably abrupt? She seems together but, like her power, she suggests a limitless amount of potential.

Similarly, Nathan’s onslaught of abuse and shaming from the community around him is set in a paradoxical situation as he’s told constantly to stay calm, to never anger, and yet is consistently pushed to his breaking point by those around him. He isn’t angry because of bloodlust but because he’s constantly beaten and belittled, used as a pawn, or seen as a sentient weapon. It’s why his meeting the wanderer Gabriel and their foray into the Blood Witch camps is such a welcome exploration of self for the character, unburdened by what others view him as instead revered positively for his potential power.

Beyond the characters are the visuals. Despite a definite squeamishness, there’s a pull to the disarray and destruction performed in the Netflix series, with deaths and defiance in the face of violence being filmed with grace and beauty despite the gore. It’s fantasy, therefore it has access to spectacle, and it holds onto it readily, greedily even, going for the big shocking moments rather than playing it safe. It’s bloody and assertive in tone, with the direction by Colm McCarthy and cinematography from Nick Remy Matthews and David Higgs making the most of their budget for a final product that has a distinct and arresting visual style. Relentless in execution, it aims to make even the most grisly images something picturesque.

The Bastard Son and the Devil Himself is one that may have gotten lost in the crowd of bigger, starrier names. Nevertheless, since its October premiere, it’s managed to build a steady and strong following of fans. For those unaware of the book, it’s a needed antidote to how dull and gray fantasy can appear these days. The Netflix series swerves in the opposite direction, producing a vibrant and enriched world that strikes at the big set pieces with bigger emotions because it understands the genre it’s born from can handle it. More shows should swing this big because even with the rough edges, it makes for a much more engaging and, frankly, fun watch.


← 'Lamborghini: The Man Behind the Legend' Is Dull | 'She Said' Is a Righteous Recap and a Bad Movie →