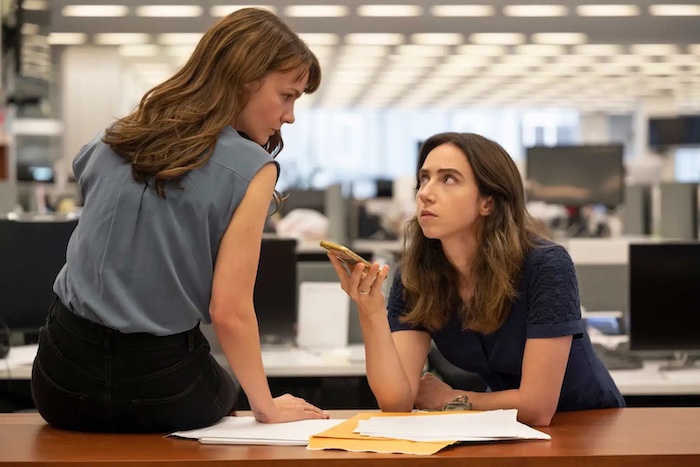 'She Said' Is a Righteous Recap and a Bad Movie

Good investigative journalism can be the stuff great films are made of, from All The President’s Men to Spotlight and a wealth of other titles that came before, since, and in between. She Said, the new film adapted from the nonfiction book of the same name by New York Times journalists Jodi Kantor and Megan Twohey, recounting their investigation that ultimately broke the Harvey Weinstein scandal, might be the latest entry in a storied lineage, but it falls incredibly short of reaching the heights of its more illustrious forebears.

She Said brings together an impressive team in front of and behind the camera, directed by Maria Schrader (Unorthodox, I’m Your Man) from a script by Rebecca Lenkiewicz (Disobedience, Colette) and starring Zoe Kazan and Carey Mulligan as Kantor and Twohey, respectively, but ultimately plays out as a prime example of how an all-star team can come together with the best of intentions and still produce a D-grade product. We are in an era of reckoning—still far too often empty lip service, but also some meaningful change—regarding the kinds of stories the entertainment industry tells and who gets the opportunity to tell them. It is an important conversation—but it is also, importantly, not the only conversation that should ever be deciding the existence of a film. The notion that a film is “important” or “necessary” because it tells an important story is well-meant but deeply misguided, and She Said is perhaps one of the most obvious examples of this to date; it is like watching an adaptation of a SparkNotes. If the only goal is to inform of a true event, the best vehicle for that is not fiction.

Just because the cause is worthy and the message is righteous does not make the movie good, and this is not a good movie. Weinstein was an absolute monster and investigative journalism holding truth to power is good—the moral compass is pointing true north here, it is true. I will even go as far as to say the film’s efforts toward emphasizing Weinstein as a symptom of a malignant system as opposed to seeing him as a “bad apple” are commendable, even if it ultimately spends a lot more time repeating words like “systemic” than it does effectively illuminating how that system actually works (the 2020 film The Assistant did a much better job of this). Intentions aside, message aside, She Said is dramatically inert and narratively confused, with the jumpy plotting and belabored flow of a truly rudderless film. There is much talent here but the film lacks creative vision—any element of dramatic or aesthetic intention beyond recounting a fictionalized, simplified version of a true story that will no doubt already be familiar to the vast majority of its viewers.

She Said attempts to set up Kantor and Twohey as a dynamic duo and dramatic foils, but they are not especially convincing as either. Kazan plays Kantor as a quirky, nurturing maternal type—the sort of mom who might be mistaken for a student dropping her children off at school with her backpack, comfort-driven style choices, and general air of wide-eyed anxiety—while Mulligan as Twohey is more of a grounded #girlboss in a leather jacket (so we know she has some edge). These are the most surface of surface-level differences. When one of them says something, the other says, “yeah, you’re right.” That is basically the only conversation these two women have, and as the story here is not of a struggle to uncover a deeply buried crime, but of convincing women to go on the record publicly in sharing their stories, the lack of any conflict in Kantor and Twohey’s dynamic or any meaningful differences in approach to investigating the story decimates any opportunity this film had to be dramatically compelling.

Where is the conflict? Where are the stakes? The actual personal stakes? Genuine interpersonal conflict, beyond Twohey’s brief bout with postpartum depression, which practically vanishes from the storyline the moment she opens up to Kantor about it? Even if the actual journalistic duo experienced such fantastically smooth sailing in their working relationship while working on the Weinstein story, it is exactly in these sorts of spaces where a good dramatization can and should utilize artistic license to tell a good story while still being appropriately referential to the truth where it counts. This is precisely the sort of storytelling that She Said fails to do, resulting in something that feels less like watching an actual movie than it does a star-studded re-enactment. Of the impressive cast, it is only Jennifer Ehle as Laura Madden, one of the survivors who eventually came forward publicly to hold Weinstein accountable, who manages at times to rise above the material and give it some semblance of life.

She Said does not utilize the freedoms of dramatization to spark important conversations, elevate key themes, or make it more accessible or engaging than the non-fiction it is based on. It is just a stilted, underwhelming echo of reality.

She Said is now playing in theaters.