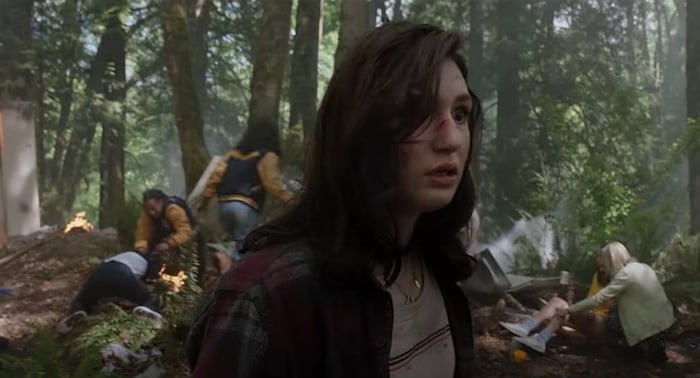 It’d be easy to describe Yellowjackets on Showtime as a gender-swapped Lord of the Flies and that’s probably what the elevator pitch started with. However, three episodes in it’s very clear that this show has a mind and concept all its own. We’re not just watching a group of teenaged girls trying to survive in the wilderness after a plane crash; we’re seeing the reverberations of their time in the wilderness on the rest of their lives.

(Spoilers for the first three episodes of Yellowjackets ahead.)

When we first encounter the women in 2021, one of them is running for office and a “reporter” with no bylines is sniffing around some of the survivors about writing a book, so the tension is trying to figure out if someone is talking to the reporter and what might get out about the time these women spent in the woods and how it could wreck their lives now. It’s good tension! The cutting back and forth between the girls before and after the crash and who they are as adults make for a compelling show! Then the strange symbol the survivors were getting mailed to them via anonymous postcards showed up in the woods before anyone from the plane crash could have carved it and we started to get more hints that we’re entering a LOST style mystery. I’m not that excited about it.

It seems like every season we get a new show that is trying to capitalize on a mystery box concept of some kind. Some more in the realm of sci-fi, like La Brea or Debris. Others take the idea of a single fantastical element in an otherwise recognizably real world like Manifest. But every year you can point to at least one drama on a network that was definitely sold using a comparison to LOST. For Yellowjackets, it seems like if the first line of the pitch was “Lord of the Flies but with a girls soccer team in 1996.” The second line was “And the site of the plane crash has a spooky mystery about it like the LOST island.” Frankly, I’m already dreading the way the mystery will take away from the very human drama that’s unfolding both in the 1996 and 2021 timelines. Teenage girls devolving from a group of typical high school athletes to a group of traumatized survivors hunting their own and engaging in ritualistic cannibalism over the course of a year and a half is enough! There doesn’t need to be anything driving that.

The other thing that worries me about an overarching mystery is how the show will plan for multiple seasons while still giving a satisfying resolution for the current one. If the matter at hand is an ongoing exploration of the kind of depravity a group of hopeless teenagers desperate to survive will sink to, and how that echoes through to their adult lives, there’s a lot of exploration that can be done. If there’s a mystery to be maintained, it seems like things can only go downhill after a certain point in terms of narrative satisfaction. (See also: LOST.) Perhaps that’s pessimistic, though, and there’s a plan for a specific story that can be told in however long Showtime wants to give the creators. Historically, trusting that hasn’t worked out well for me with other shows with big mysteries. (Looking at you, Orphan Black and BSG.) Although, a weird spooky mystery could help with my big question of how does a plane crash in the North American continent go undiscovered for 19 GODDAMN MONTHS in 1996? Even without a beacon, the flight path would be known and there’s a huge plane wreck that would be clearly visible from a helicopter!

I’m sticking with Yellowjackets for now because I’m enjoying the show and want to see how the story plays out, with or without some big mystery.