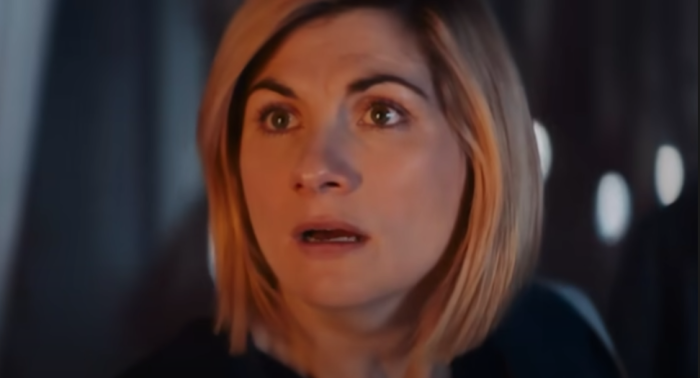 Previously, on Doctor Who: The Sontarans attacked Earth, in cahoots with Prentis, while the Doctor was trapped between universes with the Dusty Disco Twins, who killed her mum. Here’s my recap for episode 5 if you missed it!

This week: Thirteen has to save the universe/s from the Flux, grapple with her memories, defeat the Dusty Disco Twins, rescue Diane and Vinder, catch up with Kate, find her friends and the TARDIS, defeat Sontarans, Daleks and Cybermen (oh my), reunite Bel and Vinder, defeat Prentis, cheer up Space Doggo and return the Mad Mole to his original time, and, well, it’s a big ask. Bit too much for one person in an hour, if we’re honest. But thanks to some timey-wimey shenanigans, she’s got some familiar looking allies to help her out. Spoilers will follow; let’s see how this bonkers behemoth of a narrative finally finds its way to a resolution.

‘The Vanquishers’ was somehow both very Doctory and not very Doctory at all. There’s such a narrative mess to sort out that it takes three Doctors at once, and once again there’s no time for any of the moments or characters to breathe, leaving the finale underwhelming and viewers wondering if the writers had maybe forgotten something teensy weensy in the process. Like the un-reset destruction of most of the universe perhaps? No?

Whittaker’s performance as Thirty-Nine the three Thirteens was perhaps her best work yet, though it was a groan-worthy twist, and left me wondering how none of the Doctors talked each other out of a plan that consisted of a strategic triple genocide. Nor did anyone question why fleets of Big Bads constitute sufficient matter to counteract the antimatter of the Flux, when the Flux has eaten up plenty of planets and still had room for dessert. But damnit Jim, I’m a writer not a physicist. Hashtag Science. I’m sure it all makes sense to someone.

No wait, this one was the Super Duper Flux Edition of the one plan they have ever had. This time, they figured that when they unleashed time, they could watch the Flux on repeat. (OMG, the horror! Wait, the phenomenon, not the show. Cool. Oh, that’s still bad.) They will use the unrestrained power of the Time God Or Whatever This Is to re-set the universe then burn it again, now that they have seized control of the Flux from Division. They also planned to indulge in a little light mwahaha-ing and glitter crafting, I’m sure. It’s OK though, because Time dusted the Dusty Losers before they could do any of that. Oof, that means unless the Dusties pre-emptively re-set the universe using their own mojo, there’s not much left, and if there was a scene resolving this that ended up on the cutting room floor, that’s a pretty big oversight, and makes little sense given the trailer for the New Year special.

Meanwhile on Earth, the Sontarans murder all of Space Doggo’s kind by venting them into space and then nicking their ships to use as a shield for Sontaran ships. POOR SPACE DOGGO! Claire and Professor Jericho go undercover as psychics so that the Sontarans can work out when the Final Flux Event will start, and the Sontarans set up a trap there for as many Big Bads as possible, promising an uneasy alliance for the assured survival of each species, but really banking on dumping those foes into the Flux while hiding behind a Space Doggo shield, so that they can be the ultimate Big Bads in whatever crumbs are left in the universe. Daleks and Cybermen show up to make friends, and while Yaz wonders if they should warn them of the trap, Thirteen is like ‘nah, let them burn, and let’s kill off the pesky Spud Heads too,’ in a remarkably un-Doctory spirit. Let the record show that the ONE TIME Daleks and Cybermen try something other than MURDER MURDER CATCHPHRASE PARTY, they end up fried.

The show has already established that Space Doggo can remotely control other ships, so when he whips away the Space Doggo shield, the Sontarans are burned to crisps as well. Unfortunately, Professor Jericho couldn’t escape the Sontaran ship with Claire, and looked his death in the eye like a champ. There’s time for a cutaway shot of Yaz, who has been his BEST FRIEND for three years, but barely reacts to him burning to a cinder. Huh. Weird.

After eating all those Big Bads, the Flux is still hungry (maybe it has a Space Tapeworm or something) but Di, who has become an expert on Passenger forms since being stuck in one for ages, suggesting summoning Passenger and using him like an antimatter vacuum cleaner to suck up all that leftover Fluxness. Again, the Flux ate planets, but OK. The helpful Ood weakened it a bit, and that’ll do.

Turns out, Passenger is the ultimate Henry the Hoover. Awwww, cute. He’s going to have some terrible indigestion though.

You might sense that I have a few issues with this episode, and that’s fair.

Where do we end up then? Bel and Vinder reunite and hug, yay! Yaz and Thirteen reunite and hug, yay! Dan and Di — well, no luck there for Danny Boy, as she’s mad at him for being late. (It wasn’t really his fault, but to be fair, she got stood up, kidnapped, miniaturised and imprisoned in a Passenger, and only escaped by getting to know its innards, and as far as dates go, it’s hard to come back from that.) Dan’s got little else to do but join the TARDIS team for a few more adventures. Space Doggo loses his entire race, and doesn’t get his BFF Doctor Ruth back; instead Thirteen sends him off to look after Bel and Vinder, because that’s exactly what a misanthropic dog wants: humans, with another human on the way, taking up space on his ship and emoting all over the place. What of the mysterious fob watch holding all of the Doctor’s lost memories? She asks the TARDIS to hide it for her. (Got to keep this arc going somehow.) The fabulous Kate got little to do except turn up in the tunnels with the TARDIS. Prentis is exiled to a barren rock floating in space, surely to return. And while some of those fan theories came to naught — Bel’s baby wasn’t the Timeless Child, and Professor Jericho was just a lovely chap, honestly what kind of monster would suspect anything else — the Time God has a not-so-cryptic warning for Thirteen that her time is nearing an end, and that the Master is lurking around somewhere.

For an episode with so much happening and such high stakes, the resolution was brisk, choppy and emotionally underwhelming. I have to imagine the writers intended to re-set the universe, because the Big Bad for the New Year special is the Daleks, and they were just wiped out, though Daleks have pulled that trick before. They are like the herpes of the Who-niverse. Flux seems like a story that prioritised a frantic plot and trippy timey-wimey stuff over characters, and left a lot of viewers, me included, looking ahead fondly to the return of Russell T Davies, who knows how to make you care when the stakes are high, and can make you sob your heart out [cough Rose cough Donna]. Professor Jericho’s death should have made us howl. Space Doggo’s grief should have broken us completely. This could all have been so much better. Flux was a bold experiment, with lofty ambitions, but the execution left a lot to be desired.

Let’s leave Flux in 2021, and hope the New Year special is as fun as it looks in the trailer!

← 'Spencer', 'The Crown,' and the Pop Culture Revenge of Princess Diana | 'The Shrink Next Door' Isn't Very Good, Is It? →