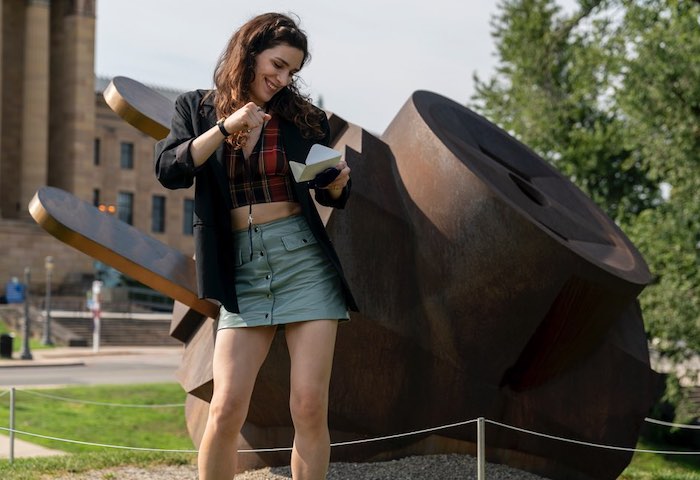 Two episodes in, and I genuinely cannot get over how much I love this series. Dispatches from Elsewhere is similar to a lot of things we already know, but it’s like nothing else that’s out there right now. Pop culture turned a corner many years ago, probably with Game of Thrones and The Walking Dead and Breaking Bad. Somewhere along the way, we lost our sense of wonder. Great television became almost mechanically plot-driven. We forgot to feel. We still see it occasionally — in the chemistry between Eve and Villanelle in Killing Eve or in the introduction of Jodie Whitaker as The Doctor. But there is so much television, and so very little of it seems to be specifically designed to evoke this transportive, dreamlike feeling. I didn’t even realize I’d missed it so much before Dispatches.

We used to see it in movies like Safety Not Guaranteed or Eternal Sunshine of the Spotless Mind or Amelie or that delightful French comedy Micmacs. This is how Dispatches from Elsewhere makes us feel, like we’re living in a different time where we still aspire to feel good. It’s such a foreign concept right now, and maybe even a privileged feeling, but it really does feel so genuinely nice to allow ourselves to be swept up into something like Dispatches from Elsewhere for a few moments and forget the world in which we live. It’s the kind of show that I find myself clapping at giddily or holding my heart and gazing upon these characters with reverie.

Simone is the feature character in the second episode of Dispatches, and I know: She’s Kate Winslet in Eternal Sunshine, she’s Natalie Portman in Garden State. I know, I know, she’s as Manic Pixie Dream Girl as they come, but she’s also trans, and that comes with a level of uncertainty and insecurity that changes the manic-pixie dynamic in some ways. She’s beautiful and spirited and fun and she has this wild sense of adventure as she sets off along with Peter (Jason Segel) to figure out this elaborate scavenger hunt, but in Eve Lindley’s performance, there is also so much vulnerability. Peter is crushing on Simone hard, and Peter himself is not accustomed to these feelings, while Simone is not even ready for those feelings because she’s just figuring out how to deal with the world. She’s not ready to add flirting into the equation. It’s not heartbreaking or sad. It’s understandable. Because this game has brought Simone into the world, and she’s not ready to complicate it with romance. Not yet, anyway.

This game, meanwhile, is so much fun to watch unfold. And it’s this element — the game — that feels most like AMC’s The Lodge. Peter and Simone traipse around the city with a talking fish, and they follow the clues from one quirky, magical place to another, and the game fills both characters with so much life, but it also brings them closer together. The game, it seems, pits the Jejune Institute against the Elsewhere Guys, and we don’t know the motivations of either group, but if there’s anything sinister at play here, it’s artifice. It’s part of the game. It’s like David Fincher’s The Game, except it’s designed to wake these characters up emotionally, to reintroduce them to the world that they have been hiding from, or that they have been too scared to engage with. But there’s nothing dangerous about the game. It’s playful and mysterious but inviting, and I never want these episodes to end because it means returning to reality. Right now, the world of Dispatches is a much, much better place to be.