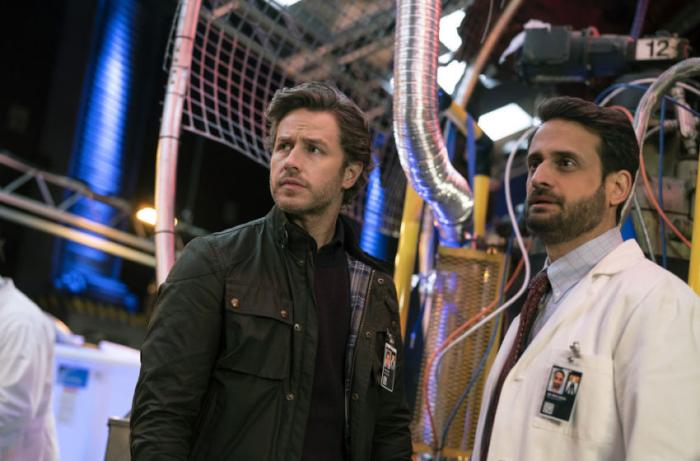 'Manifest' Is 'Lost' for Fans of 'Chicago Fire'

After last night’s double episode, so ends another season of Manifest. It was an improved season, but one that was still uneven and made very little progress despite all the noise and ball hiding. As the season moved along, it leaned heavily into its obvious inspiration, Lost, but the more it did so, the more it highlighted the superiority of its influence.

There is also a faith vs. science debate going on here, but there’s no real friction because Manifest is hostile toward science — the scientists are dismissed or convinced to come over to the faith side while logic is left to languish. Meanwhile, there is no subtlety in what Manifest is trying to say about faith, but there is also very little coherence. It neither shows nor tells; it relies largely on the occasional buzzword meant to evoke religious connotations.

In defense of Manifest, Lost wouldn’t air on a broadcast network today. It’d be five, 10-episode seasons on Apple TV+ (and arguably much better for it). Manifest is forced to cater to a demographic that mostly watches Chicago Fire and The Voice, which means mixing procedural elements with One Life to Live actressin’, and it’s still perpetually on the bubble despite dumbing itself down for The Blacklist viewers.

Moreover, to its credit, this season of Manifest did seek to tie in some of the aborted arcs from the first two seasons, but it often felt more obligatory than logical. But the series also eschews nuance or even symbolism and instead beats us over the head with obvious references, like Noah or naming the baby, Eden. Noah (of the Ark fame) played a big role in the season. A piece of driftwood dating back to the Ark was discovered after surfacing through a crack in the ocean caused by an earthquake only to later be used to snuff out volcanic activity in upstate New York, and while the storyline references Noah, it doesn’t play into his Biblical story.

More interestingly, however, the finale does dabble in the actual story, positioning Ben Stone as the Noah of the series, but also suggesting there were two sides to the Noah story. Yes, he saved humanity with his Ark, but others may have viewed Noah as the destroyer of humanity because he called upon God to flood the planet in an effort to wipe out the evil (Spoiler alert: It failed.)

Eagan and Adrian — the anti-828 cult leader (who was also a passenger) — also believe that Ben is in league with the government (God?), which is interesting conceptually, but in practice, it all plays out in a cheap hostage situation where Eagan (and another passenger) break into Vance’s home and hold a gun to his son’s head. It subsequently fizzles out in their arrest, but not before Jared finds (convenient) evidence in Vance’s home that connects Saanvi to The Major’s murder. When he confronts Michaela about it, she admits she helped to cover it up, which is apparently the last straw for Jared, who is done with Michaela and her callings. He now realizes he’ll have to break up with The Major’s daughter, Sarah, or otherwise live with the lie of knowing who her mother’s murderer was or arrest Michaela for the cover-up.

There are a lot of contrivances involved with the 828 tailfin, which recall was pulled out of the ocean near Cuba in the season premiere. Much of the episode involves how to deal with the 828 tailfin, the subject of a number of callings over the course of the season. Ben and Cal — with Olive’s help — eventually realize the tailfin has to be returned to the ocean, which requires that they sail into an electrical storm. Saanvi does the honors — pulling the lever to release the tailfin — but she falls into the ocean while doing so, and Ben has to fish her out. The tailfin, however, vanishes whence it came, which brings the season full circle but doesn’t really tell us anything new. The tailfin mysteriously surfaced, it inspired a lot of callings, and 13 episodes later, it mysteriously disappeared, and none of us are the wiser.

Adrian, meanwhile, is the key to a Michaela calling that stretches out over two episodes, which begins with visions of blood dripping from the walls of Flight 828 and ends with Adrian’s eyes bleeding, a callback meaning that Adrian is lying about not having visions, as he had earlier claimed to Michaela. His calling forewarns a death, but it is too late to prevent it once Michaela figures it out. Paige Jennings from The Americans — who joined the anti- Ben Stone mob — continues to believe that baby Eden is somehow her guardian angel, and in the final moments of the episode, she stabs Grace in the stomach and runs off with her baby.

Cal — who vanished earlier in the episode when he was struck by dark lightning while touching the 828 tailfin while it was being experimented on in Eureka — reappears as a teenager played by a different actor (having gained back the five years he lost in the time jump) only to see his mother die. “It’s OK, Mom. I know what to do now,” he says to Grace, as she passes away (he should tell the writers!). Killing off a major character, albeit a largely extraneous one to the series, is a big deal for Manifest, and props to the series for keeping it a surprise (the character is dead, but showrunner Jeff Rake hasn’t ruled out her return in other forms, such as, perhaps, Ben’s Dark Passenger).

In the final seconds, meanwhile, the lead scientist in the Eureka lab sees the pilot of 828 reappear in the reassembled plane before the entire plane completely vanishes, with the pilot inside.

Manifest hasn’t officially been picked up by NBC for a fourth season yet. A decision may depend on the ratings for the finale, plus the series performance on Netflix, where it is now streaming (and currently the second most-watched TV series on the streamer). There are certainly a number of unresolved issues. Ben obviously doesn’t know his wife is dead, or that his son returned as a teenager. No one knows that the reassembled Flight 828 has disappeared. The Zeke/Michaela/Jared love triangle is also still unresolved.

More importantly, after three seasons, we don’t have any goddamn idea why the Flight 828 passengers returned, besides a few vague references Ben has made to resurrections, in the Biblical sense. As a series finale, this episode would be hugely unsatisfying (and Netflix viewers would be smart to wait on that decision before diving in). If NBC does pick it up for another season, the network would be wise to announce it as the final season so that the writers cannot escape their responsibility to provide the show with some resolution. Otherwise, I fear, they will drag us along with circular storylines and season-ending cliffhangers until the network finally puts the show out of its misery.


← Review: 'In The Heights' Makes for a Cotton-Candy Sweet, Deliciously Summery Spectacle | What Is The Big Deal About 'Demon Slayer,' Anyway? →