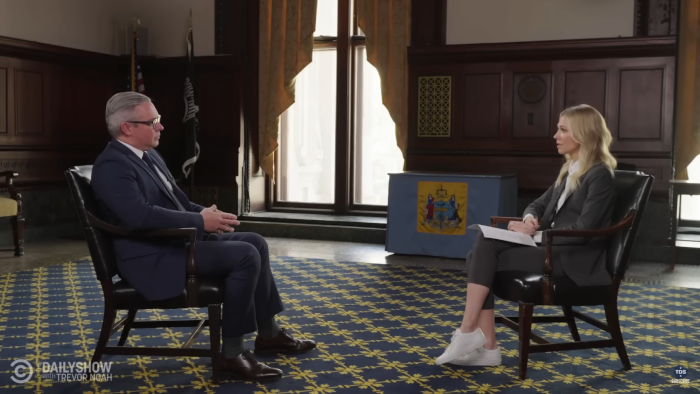 The state of Arizona will certify its midterm election results today. This comes after election officials in Cochise County attempted to withhold tens of thousands of votes. A judge eventually ordered the county to certify the votes, avoiding a potential catastrophe. While this was a threat from election officials, there have also been threats to election officials. Threats could cause more officials to resign, paving the way for more election deniers, as highlighted in a new report from The Daily Show’s Desi Lydic.

Lydic, in the third part of a three-part series, sat down with Tammy Patrick of the Democracy Fund. Tammy had good news. Most elections went off without a hitch this year. That was also the case in 2020, so maybe there was less pushback against the results this year (unless you’re in Arizona). That doesn’t mean that there were fewer threats against election officials. There are still plenty of people willing to carry TFG’s bloated torch.

Desi also sat down with an official who had firsthand felt TFG’s petulant wrath. He resigned because of it. Al Schmidt, the former Philadelphia City Commissioner, was called out by TFG on Twitter in 2020. Prior to the election, threats had gotten so bad that his family required constant police protection.

One of the worst aspects of this story is that Republicans will consistently deny that they are promoting violence against their opponents. Even TFG’s tweet about Schmidt isn’t directly calling for harassment. I’ve watched enough pro wrestling in my life to know that that claim is bullshit. You need only watch a clip or two from a TFG rally to see what he thinks of violence. He won’t commit any himself, of course. Most cowards don’t. But he will get his supporters all amped up, embrace violence, tell them he doesn’t like someone and let the chips fall where they may.

Today is a big victory for elections. It is also worth celebrating the fact that things did not get as hairy as many predicted (and I pulled my hair out worrying about). But, when the people who are committed to legally doing their jobs get pushed to an understandable brink and decide to quit, we may be left with more people who would rather break the law and install a dictator than do their jobs.


← HBO's Full Length 'The Last Of Us' Trailer Is Spellbinding | GOP Outraged About Perceived Constitutional Violation, But Mum On Terminating Constitution →