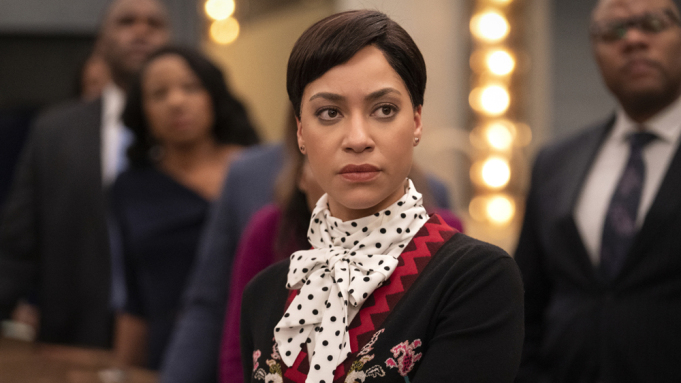 This week’s episode of The Good Fight inadvertently became the fourth season finale of the series, after production was forced to shut down with three episodes still yet to film. The seventh episode sort of worked as a season finale, as it took up the death of Jeffrey Epstein and the conspiracy theories surrounding it, some of which I had never heard of, like the Epstein Truthers who believe that a sci-fi novel called Space Relations written by the Attorney General’s father, Donald Barr, is somehow related.

In any respect, The Good Fight lost Justin Bartha after the second season, Rose Leslie after the third season, and now it will see the departure of two more series regulars. Delroy Lindo announced that he would be leaving the series back in March to take a role in the ABC drama Hell’s Kitchen.

Meanwhile, we are learning this week that Cush Jumbo, who plays Lucca Quinn — one of the few characters who came over from The Good Wife — will also be leaving.

“I have had the most amazing time over the last five years working with Robert [King], Michelle [King] and the crews of both The Good Wife and The Good Fight,” the English actress told Variety. “I will miss them all so much but am so excited to explore pastures new. Due to the pandemic forcing us to shut down early we weren’t able to wrap up Lucca’s story fully and so I hope if schedules allow I can return next season to do that.”

In the meantime, the Memo 618 conspiracy also remains unresolved and it is unclear if it ever will be fully resolved, as The Good Fight tends to roll with current political events and by the time it returns, we may have a new President.

Cush Jumbo can currently be seen on Deadwater Fell on Acorn TV.

← Jimmy Kimmel on Donald Trump: 'Enough if Enough. We Gotta Vote This Guy Out Already' | Jake Paul is Not the Story →