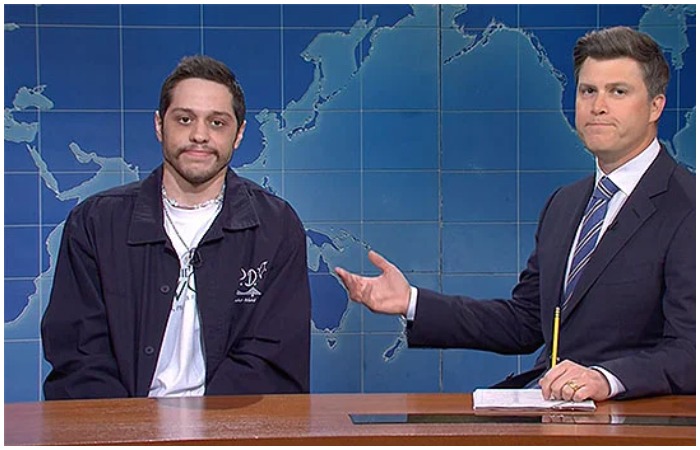 Davidson, McKinnon, Bryant (and Mooney) Get Proper Send-Offs in a Killer 'SNL' Finale

Cold Open — Fittingly for Kate McKinnon and Aidy Bryant’s last episode, the show kicks off with Mrs. Rafferty and the recurring alien abduction sketch. Per usual, Mrs. Rafferty talks at length about her knockers and her coo-coo and her yeastie and her beastie and her hairy monster and her donghole, etc., etc. It ends with a very sweet and tearful finale for McKinnon. She will be missed (unlike Kyle Mooney). (Score: 6 out of the 10 for the sketch, but 9 out of 10 for the send-off)


Natasha Lyonne — Lyonne is energetic as hell and brings out her SNL alum friends, Maya Rudolph and Fred Armisen, who trot out their terrific Lyonne impressions. Lyonne introduces an old clip of her on “Pee Wee’s Playhouse!” and then there’s a fond memory of a bird splatting in Fabio’s face on a roller coaster. Nice monologue, better because Kyle Moony does not make an appearance! (Score: 6.5 out of 10)


’50s Radio Broadcast — Lyonne and Mikey Day play old-timey announcers calling a Yankees game. Lyonne’s character took methamphetamine for a cold, and she’s like old-timey Brockmire — everything she says is horribly, hilariously inappropriate. “I have some observations about different races.” NO! She also has a helluva story about Babe Ruth that you can’t miss. This one has some real Mat sketch of the week energy. (Score: 8 out of 10)


Tris Henderson Trio — I have no idea what’s going on with this sketch. Is this a Mooney joint? It feels like Mooney’s work. It’s formless and rambling, and an otherwise terrible save for Kenan’s energy, which elevates it by 3 points, so … (Score: 4 out of 10) (Watch Here)

Senior Prom — Andrew Dismukes looks back on his prom 20 years ago, and all the terrible, awful, murderous things that happened to his graduating class over the last two decades. Mooney makes an appearance, but he doesn’t speak, so he doesn’t ruin it … (7 out of 10)


Weekend Update — Monkeypox, Elon Musk, Trump, GOP candidates, baby formula. I’ll miss you for the next four months, “Weekend Update.” Che and Jost have, weirdly, grown on me in the last couple of years, because while they were not the right “Update” hosts for the Trump era, it seems fitting to have them usher in the end of the Democracy. I will not, however, miss Alex Moffat’s “Guy Who Just Bought a Boat,” who appears to talk about travel ideas. Not a fan, but I think that Moffat can finally fill the white-guy douchebag vacuum left by Beck Bennet. Aidy and Bowen are back with “Trend Setters,” which is lousy, but it is a nice send-off for Aidy — I love Kate, but the Aidy is the biggest loss to SNL among those leaving. Pete Davidson also gets his send-off segment — it’s fun, although not as sweet as his send-off last season. Why aren’t Colin and Che swapping jokes, as they do at the end of each season? Bummer. (Score: 8.5 out of 10 (for the lovely send-offs, which do not include Kyle Mooney)


9:15 to 5:10 — A 9 to 5 parody combined with a Weekend at Bernie’s parody, where Lyonne has to pretend to be dead while she’s being tickled and manipulated. The whole thing is designed specifically to make characters break, and it is incredibly successful! It’s so good that not even Kyle Mooney can ruin it. Amazing. Mat, you get another sketch of the week! (Score: 7.5 out of 10)


Grey Adult Pigtails — A hairstyle for women of a certain age! I’m 58 percent certain I’m married to a woman who will be one of these women in 35 years. I think this is the low-key Mooney send-off, and I just want to thank our readers for all the emails, tweets, and DMs I’ve received in the days since this generation’s Chris Kattan announced he was leaving. Also, for what it’s worth, while I do not like Mooney’s style of comedy, there are some people whose opinions I value that do (Roxana, ahem). He’s just not for me. I’ve also heard Mooney on a few podcasts over the years, and while I do sh*t all over his brand of comedy whenever I’m given the opportunity (and sometimes for no reason at all!), he sounds like a decent non-problematic guy, which is a rarity. I’m gonna miss ragging on you, Mooney! My post-SNL advice: Befriend Sandler. Take whatever he gives you.


See you all next season!