I wish I had binged David Chang’s latest show on Hulu, The Next Thing You Eat. The episodes are only a half-hour long so it’s totally doable. But the first two episodes, “Delivery: Rise Of The Machines” and “Burgers: Balanced Diet,” bummed me out so much that I turned it off and had to force myself to go back and finish the other four. I’m glad I did. His view of the future of food manages to get slightly rosier by the final episode. But, if you choose to watch it, prepare to feel bad about a lot of things.

David Chang is not, by nature, an optimistic person. Every time he tries to convince the audience or his scene partner that he’s feeling hopeful it rarely ring true in The Next Thing You Eat. He also isn’t the first person to point out how screwed we are as a species, nor is he necessarily the most engaging person to do it. This is nothing like any of the cultural exploration Anthony Bourdain did. It’s not a love letter to a country’s cuisine like Stanley Tucci gave us. But if you’re interested in where the food industry might be going, post-Covid, you will definitely find a hook somewhere in this series. 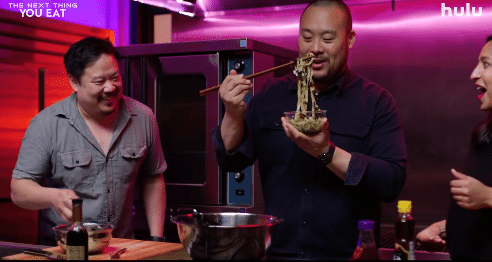 I say “might” because this is all very speculative on Chang’s part since he’s really looking 30-50 years into the future for most of the series. In the first episode, he laments how the pandemic gave rise to mostly unscrupulous delivery services, which he sees as putting restaurants out of business sooner rather than later. He’s certain that customer demand for every food to be available everywhere at any time is going to kill the industry. There will be no more entry-level restaurant jobs, brick and mortar restaurants will give way to a series of “Ghost Kitchens” or worse, kitchens staffed by robots creating your food. Nothing but gloom and/or doom to look forward to. But, in the third episode “Restaurants: A Reckoning,” he admits that Covid forced the restaurant industry to reconsider the unsustainable status quo that it has been operating under for the past 10 years or so. He mostly credits the media with creating the current restaurant bubble where the order of the day was accelerated growth AT ALL COSTS. Those costs, of course, were the health and well-being of the staff and menu choices. The global pandemic forced what would have probably been unnoticeable, incremental changes to happen all at once, which threw the industry into what Chang sees as a necessary chaos. It needed to be blown up in order to survive. The changes he sees coming down the pike include the size and location of restaurants and what they’re serving.

In The Next Thing You Eat, Chang envisions a future that looks a lot like Blade Runner. Where real animals and animal proteins are a luxury and cell-grown meat, cell-grown fish, and meat alternatives like kelp, mushroom and insects are the order of the day. I suppose those of us who have ever enjoyed escargot can learn to eat fried crickets or mealworms. I think I’m going to need them disguised as hamburger patties or taco meat. He also sees a future full of innovation and a fusion of ideas and cuisines that would not only be more sustainable than the current course we’re on, but would also expand Western (read U.S.) palettes to embrace more diverse flavors and ideas about food.

Once, when I was very young, I had to attend an early morning event in Chinatown with my parents. We hadn’t eaten breakfast beforehand so we stopped at a shop to see if we could find something to eat. Ten year old me was kind of grossed out by the idea of fish balls for any meal, let alone breakfast. But why AREN’T we eating delicious bowls of hot noodle soups for breakfast here? Why aren’t breakfast nachos acceptable? If Danny Trejo eats them, how can they be wrong?

Chang, and his more personable podcasting partner, Chris Ying, interview a number of interesting up-and-comers in the food world. From chefs to food tech industry innovators, writers to fishermen. Everyone has an interesting contribution to make here that deserves a deeper dive than the episode lengths allow. It’s a good thing a lot of them seem to have book deals. It’s produced with the ADHD/21st century brain in mind. So there are lots of meme-y video cuts, animations, and a “Sentient AI Foodie” voiced by film editor Alan Lowe who dishes out exposition and history lessons throughout. It’s bleak. Even after watching it and pre-lamenting the loss of my beloved rare, bacon cheeseburger, I think it’s safe to say that there will always be restaurants. People will always want to eat and we all know food tastes better when someone else cooks it and someone else does the dishes. Will restaurants always look as they do now with white table cloths and statement chandeliers? Probably not. They probably shouldn’t anyway. Feel free to get a jump on the future of food by checking out your local food truck scene or by patronizing your neighborhood street-food vendor. Chances are good that you can already get a delicious, locally sourced, affordable meal of the same quality as a brink and mortar spot.