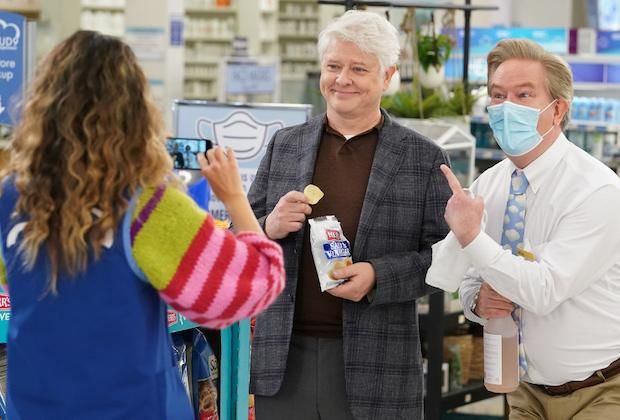 As table-setting episodes go, it’s hard to get better than Dave Foley eating dog food, which is precisely what we were able to witness in the penultimate episode of Superstore before its one-hour series finale next week.

In the episode, Mark McKinney’s Kids In the Hall costar Dave Foley — who is fantastic here — appeared as Lowell Anderson, the eccentric son of the Cloud 9 founder. He is so eccentric, in fact, that he suggests that the employees stop wearing their smocks and walk around the store among the customers as one of them; remove all the store items from their boxes so that customers can touch and feel their products before they buy them; and he encouraged Glenn to get a “groundbreaking” haircut, which ended up looking like something out of Flock of Seagulls.

In the end, however, it is revealed that the “eccentric” son is mostly just a lunatic bully, and Glenn turns the tables on him and makes him eat dog food as punishment for the mistreatment of the Cloud 9 employees and because his father ran Glenn’s father out of business. Lowell is happy to eat the dog food because, again, he is peculiar. He also knows what those of us well versed in canned dog food know best: All the good stuff settles at the bottom. But in the episode’s end, he reveals that the parent company, Zephra, is shutting down all of Cloud 9’s stores the following week.

Glenn doesn’t believe Lowell, but to Cheyenne — who has done a reverse Joey Tribianni this season in actually getting smarter as a character — it all adds up. Cheyenne, however, calls Amy — who now works in Zephra’s corporate offices — to confirm, and Amy (on vacation with her family but not with another man) says that she will look into it.

That, it appears, will be how Superstore ends. Fittingly, Cloud 9 will be shut down by COVID, which has resulted in lagging sales.

In the meantime, Dina broke up with her boyfriend. She and Garrett dared each other to go on a date together. Jonah social-media stalks Amy before trying to resign himself to settling for his new girlfriend, Hannah, although no one is buying it (except Hannah). Jonah is clearly poised in the finale to reunite with Amy. Cheyenne’s growing competence, meanwhile, foreshadows the possible Bo and Cheyenne spin-off of Superstore.


← Spoilers: Explaining the Epilogue of 'Zack Snyder's Justice League' and What to Remember from 'Batman v Superman: Dawn of Justice' | 'The Falcon And The Winter Soldier' Series Premiere Recap, 'New World Order' →