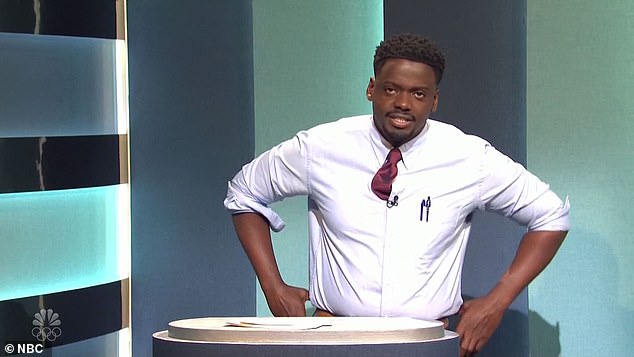 Cold Open — The now recurring “Oops, You Did It Again” talk show with host Britney Spears is a great vehicle for discussing those who have been in hot water in the last week because it allows for multiple guests; Chloe Fineman gets to do her aces Britney Spears impression; and I think it’s poetic that Britney gets to decide their fate. Here, it’s Lil Nas X, who gave the Devil a lap dance (innocent); Pepe LePew, who was booted from Space Jam 2 (not that innocent), and Pete Davidson’s Matt Gaetz, who she was not legally allowed to say was guilty or innocent, but “look at his face.” (Score: 5.5 out of 10)

Daniel Kaluuya Monologue — A short monologue, but a really good one. No gimmick this week (thank God), just Kaluuya making jokes, and ending it on a sweet note, attributing the path that led him there to Kenan and Kel. “I just want to take this moment in front of Kenan and the whole world to say, thank you Mom, thank you God, and thank you Kel.” (Score: 6.5 out of 10)

Will You Take It? — Kaluuya plays the host of a game show where he decides whether he can convince members of his own family to take the COVID vaccine. It’s … more depressingly accurate than funny, but it’s also funny? (Score: 6 out of 10)

Prank Posse — A goddamn Kyle Mooney skit basically parodying what happened to Topanga’s husband and the cinnamon toast crunch, which is to say: Mooney’s character follows each prank video with an apology video, so much so that the apology videos eventually become more popular than the pranks. (Watch Here) (Score: 4 out of 10)

Rummikub — Kate McKinnon plays a mom on a game night who passive-aggressively annoys the hell out of the other guests when they refuse to play Rummikub with her. There’s always that guy, isn’t there, who throws a fit because we don’t play the game that he/she wants to play and ruins the entire night. This is that. Also, it’s sponsored by Josh wine, which is totally one of those grocery store wines I buy occasionally because it reminds me of Josh Kurp! (Watch here) (Score: 5 out of 10)

Proud Parents — These parents are very proud of their son for being pre-med until they find out he switches his major to creative writing, after which they try to give him away. It’s good for a soft chuckle, but that’s about it. (Watch Here) (Score: 4 out of 10)

Weekend Update — The best joke on “Update” is the one where Colin Jost says that Matt Gaetz looks like a caricature drawing of himself, which is hilariously painfully accurate. It’s a solid “Update,” though, with lots of Gaetz jokes, and a very bad peanut butter and ferret joke. The three segments are Kate and Aidy playing owners of a Smoked Meats joint who try to discourage veganism by killing only the meanest animals; a disgustingly funny “Guy Who Just Bought a Boat,” basically doing Armie Hammer (you’ll love the wordplay Mat); and a 26-year-old dude who married a wealthy 106-year-old woman, which I guess is based on a real couple (but it’s not particularly funny, watch here).

Frat Party — A newly vaccinated frat plans a trip to Tahoe, but somehow everyone comes around to inviting their moms. Eh. Kaluuya is great tonight, but the sketches leave something to be desired. (Watch Here) (Score: 3 out of 10)

Half Brother — A half-brother and his partner crash a birthday party with an upright bass and spoken word poetry about their failing marriage. It’s about as good as it sounds. (Watch Here) (Score: 3 out of 10)

There were also three cut for time skits, one of which was about sexualizing Beanie Babies (ooof); something called Salt Bae, about the guy at a restaurant who puts salt on everything; and one of the better skits of the night, where Chris Redd plays a soldier during war who accidentally volunteers himself for a suicide mission.