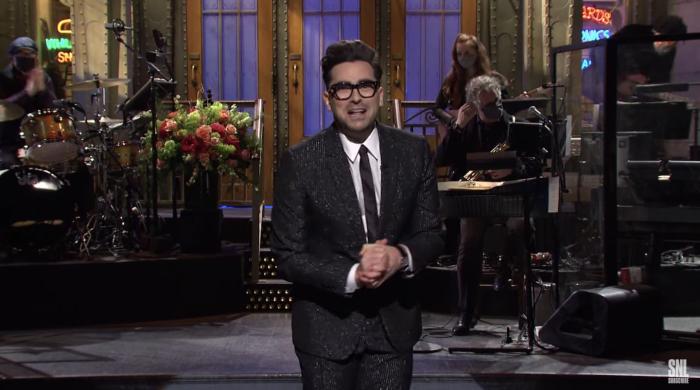 Dan Levy Hosts the Super Bowl 'SNL,' Checks In on the 'It Gets Better' Campaign, Zillow P*rn

Cold Open — In a Super Bowl pregame show with James Brown, Boomer Esiason, and the rest of the gang, we get a preview of some of the ads, which are, uh, political in nature. Aidy Bryant plays both Andy Reid and Bruce Arians (bravo!), and there are some predictions, too. It’s a fitfully amusing open. (Score: 5 out of 10)

Dan Levy Monologue — Mrs. Pajiba-hyphenate rarely stays up to watch SNL, but insisted on doing so for Levy, who gives a tour of the studio and its COVID protocols, which includes a cast decontamination station, and Aidy Bryant using a swim noodle to keep him six feet away from everyone. Eugene stops by, but he’s stuck in a decontamination box. Conclusion: Levy is far more charming than what they’ve written for him in the monologue. It’s a recurring theme for the night, and I told my wife, often the worst shows are those with the best hosts, because our expectations are too high. Thankfully, it’s not a terrible episode. Just a mediocre one. (Score: 5 out of 10)

Universal Studios Tour — Levy plays a tour guide in training, and he’s had way too much coffee, which means inappropriately sharing his Back to the Future molestation theory, his lesbian dinosaur joke, and how Newman from Seinfeld is his “softener.” (Score: 5.5 out of 10)

Super Bowl Party — Basically, how every Super Bowl gathering is going to go. The masks come off within 5 minutes, because everyone has been “super safe,” except for all of those unsafe things they’ve been doing, like “raw-dog sex with strangers.” For some reason, they also eat chili with their hands. (Score: 5.5 out of 10) Wait, it ended with Psy from “Gangnam Style.” (Score: 4.5 out of 10) (Watch Here)

Lifting Our Voice — For Black History Month, a talk show that highlights the contributions of a few white allies, who, uh, are mostly painfully tone-deaf and appropriate a lot! There’s a lot of cringing, which is the point, but it doesn’t make it much better. (Watch Here) (Score: 4.5 out of 10)

Weekend Update — So, they’ve just swapped out Trump jokes for Marjorie Taylor Greene jokes. Not exactly a step up, folks. (But yes, there are also still Trump jokes). In an “Update” segment, Mikey and Heidi play the leaders of the Child Cancellation Project, who “cancel” children for their social media faux pas (Watch Here). Keenan and Chris play those YouTube kids who lost their minds listening to “In the Air Tonight” a few months ago, and they react to other songs they’ve never heard, like the Friends theme, “Baby Shark,” and the Meow Mix commercial. They salvage an otherwise mediocre SNL. (Score: 5.5 out of 10)

Hot Damn — When the television in a sports bar breaks, the bartenders try to keep their customers happy with a “football song,” and well, it’s a bar near Broadway, and the song is a real knee-slapper. The performance is great; Kenan puts it over the top. (Score: 7 out of 10)

Wedding Objections — Levy is more like his Schitt’s Creek character here than in any other skit, but it’s also one of the worst skits of a bad night of skits. He and a character played by Kate passively-aggressively object to the groom during a wedding ceremony. (Watch Here) (Score: 3 out of 10)

Phoebe Bridgers — I’ve heard a lot about the musical guests, but I admit I hadn’t heard her perform. It’s basically Beth Orton for two songs, and then at the end of the second, she hulks out and smashes her guitar. 10 out of 10, would listen again. Watch here and here.

It Gets Better — On the 10th anniversary of the “It Gets Better Campaign,” a check-in with a few LGBTQ+ people. It did get better. Sort of! Best skit of the night here. (Score: 9 out of 10)

There are no Mat skits of the week, alas. But Mat, if you haven’t seen Schitt’s Creek, your family will adore it. I 100 percent promise (just skip the first season). Also, I hope that Tom Brady loses tonight and suffers a non-lethal but permanent injury to his face and that he has to walk around for the rest of his life as a minor grotesquerie.


← 'WandaVision' Broke the MCU's Reality and It Was Very On-Brand | 5 Shows After Dark: 'The Watch' on BBCA, 'The Equalizer' Premiere on CBS →