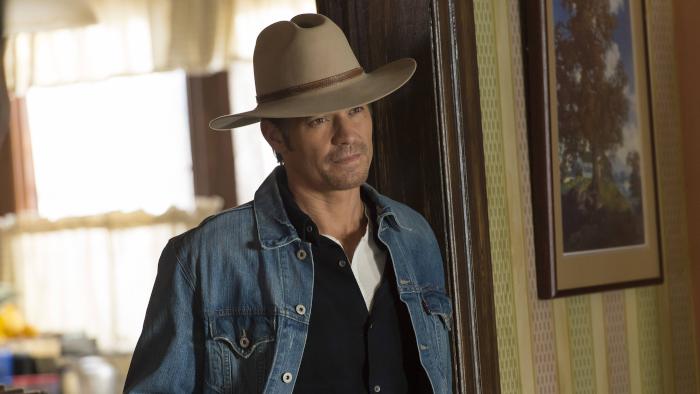 Damnit, Bobby: Raylan Givens May Return, and Steven Yeun Signs Onto the Best Show of 2022

Lots of good news today, starting with the fact that FX is developing another series based on an Elmore Leonard novel with Justified showrunner Graham Yost returning to run the show. There are rumors, as well, that Timothy Olyphant may return to play Raylan Givens. From Variety:

According to sources, as the project is in the very early stages, nothing is set in stone as of yet, meaning Olyphant could star in the series or appear in a smaller role, but no deal has yet been made.

— Meanwhile, Greg Daniels and Mike Judge are also in the midst of “hot negotiations” to bring back King of the Hill, setting it 15 years after the original aired. Hmmm. King of the Hill in a post-Trump world could be … interesting.

— Netflix, Amazon, FX, and Apple are all vying over what I am predicting will be the show of 2021. Steven Yeun(!) is working with Ali Wong on a new 10-episode series for A24 from writer/creator Sung-Jin Lee (Silicon Valley, Tuca & Bertie). There are no other details, but what other details could we possibly need besides Steven Yeun, Ali Wong, and A24?

— I mentioned this in passing earlier today, but if you missed it, it’s worth repeating: Rian Johnson (Knives Out, Brothers Bloom, that Star Wars movie) is joining forces with Natasha Lyonne for a mystery TV series on Peacock, and it sounds like a procedural, but a procedural from freakin’ Rian Johnson! How cool is that?

“I’m very excited to dig into the type of fun, character-driven, case-of-the-week mystery goodness I grew up watching,” Johnson said in a statement. “It’s my happy place. Having Natasha as a partner in crime is a dream, and we’ve found the perfect home at Peacock.”

— David Strathairn will join Daisy Edgar-Jones, Taylor John Smith, and Harris Dickinson in the film adaptation of Where The Crawdads Sing, based on Delia Owens’ best-selling novel. I read the book. It’s decent. The history behind it, on the other hand, is messed up.

— Ryan Gosling, Chris Evans, Billy Bob Thornton, Jessica Henwick, and Alfre Woodard are headed to Prague to shoot The Russo Brothers’ The Gray Man for Netflix. The movie, about a rogue CIA assassin on the run, will reportedly cost $200 million, making it Netflix’s most expensive movie yet.

— Finally, we joke a lot about Spectrum Originals on the Podjiba podcast a lot. They are shows that almost no one has ever heard of because they only air on Spectrum, at least until they find their way to Netflix or another network (like L.A.’s Finest). Lena Headey (Game of Thrones) will be headlining one from Zak Penn. The logline is a trip:

It’s about Halan and Aster (Headey) whose fates become entangled after they find themselves trapped together at the end of the known universe. Headey’s Aster mysteriously finds her way to a lonely beacon keeper, Halan, on his lighthouse in the darkest recesses of space. A tense battle of wills unfolds as Halan begins to question whether Aster is friend or foe as her ability to disguise her agenda and motives could make her a formidable opponent.

Spectrum will get exclusive rights to the series for 9 months, at which point AMC Networks will reair the series.