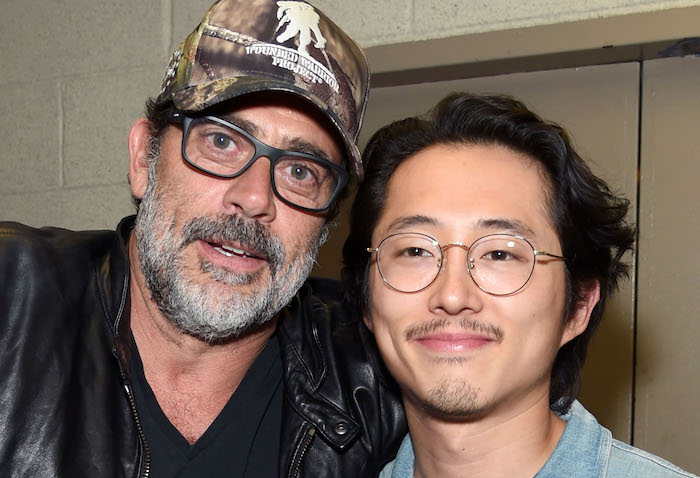 The always delightful (and very handsome) Steven Yeun appeared as a guest on this week’s Conan Needs a Friend where things — as they often do with Yeun — turned to the subject of The Walking Dead, the long-running zombie drama that brutally killed off Yeun’s character in the seventh season.

As upset as many viewers were with the level of brutality displayed when Jeffrey Dean Morgan’s character, Negan, killed off Glenn, Yeun himself saw it as something of a blessing because there was some finality to it. Yeun, in fact, relayed a story about meeting two “dudes” while he was out hiking with his kids who asked him, “Did they kill you off or did you want to leave?”

For Yeun, it was more “complicated” than that. “I don’t have time to explain this to you, I have to go home,” he thought, but also, he told Conan, “Sometimes, you just accept what it is and you go with it. There’s no tension behind it.” Yeun, after all, knew the end might be coming because his character was killed off in the comics two years prior. “You’re like, ‘OK.’ … I’m not gonna go kicking and screaming.”

Yeun had no intention of either returning to the series or doing something else similar to it immediately thereafter. “The police voice in my head said, ‘If you do it again, you’re a hack,” he told Conan. “So, I don’t do it again. I cringe [at the thought].”

That’s where Yeun was thankful for the way in which his character was killed off because there was no way he could come back, as Conan joked. “It was one of the most shocking things I’ve ever seen on television, and I’m including my early work … It’s not like Glenn could come back and go, ‘I’ve got a terrible headache and my eye is knocked out, but I think I’m OK.”

“Those are the blessings I think I’ve got in my life,” Yeun said. “An absolute door shut. There’s not like a crack in the door. It is slammed shut, and barricaded,” Yeun continued.

That’s when Conan joked that because he and Yeun are friends and know each other (the two once traveled to South Korea together), Conan has long harbored some resentment toward Jeffrey Dean Morgan after his character, Negan, brutally murdered Glenn.

“I will admit that [Jeffrey Dean Morgan] came on our show at Comic-Con and I swear to God, it took an effort for me to not have attitude. I’m a rapidly aging adult who understands showbusiness, and I had a little bit of trouble, like ‘You f**ker. You killed my friend.’ I think I cut him off a few times on his anecdotes, or I think I read the notes and read ahead to what joke he was going to do and got there first. ‘Well, that’s all the time we have for this asshole. Murderer. Why don’t you get your bat and get the f**k out of here.’”

Yeun, however, at least appreciated Jeffrey Dean Morgan’s position. “He had such a hard gig,” Yeun said. “Show up, displace the foundation of the show, and then like continue on? It’s wild.”

For more on their conversation, here they talk about Top Gun: Maverick.

← Bryan Cranston Menaces A Celebrity Softball Game In LA | Video: Talking To a Cop Like a Cop Talks To You →