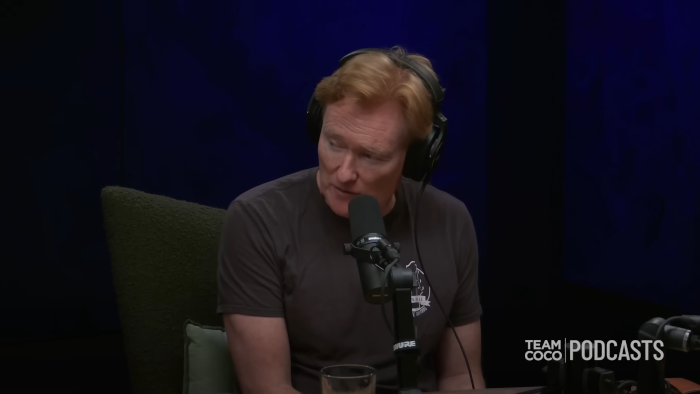 Conan O'Brien Needs A Friend Was Fact-Checked By Snopes

The fact-checking website can be a valuable tool. They try to fight misinformation with cold, hard, researched facts. They’ve corrected everything from political attacks to TikTok videos. Now, they’re wading into filmy, salty, barely translucent waters to correct a “fact” from an episode of Conan O’Brien Needs A Friend. What was so egregiously espoused on the former late-night host’s podcast that Snopes felt compelled to step in? The answer is as ridiculous as you’d assume.

In a mini-episode of Conan’s show, in which he speaks to real fans. in this case, he spoke to someone who worked for NASA. A conversation began about porn being sent up to space. The topic was spearheaded by O’Brien’s assistant, Sona Movsesian. Matt Gourley brought things to their next logical point. He added that a male astronaut could impregnate up to three female astronauts if he masturbated in space. Newspapers like the New York Post ran with this, alleging that the NASA employee themself had suggested such an event could occur. Eventually, Snopes had to step in to set the record straight.

The funniest aspect of this whole kerfuffle is Conan trying to play it off like he’s above the joke. Sona and Matt are giddy as can be while Conan, notorious for being wacky, plays the straight man. You know he has to be delighted that someone at Snopes had to stoop to such levels just to correct a joke. But, he plays into the bit, pretending to be too highbrow for such an exchange. Or, this is his breaking point, and the Conan we know is no more.

Watch for yourself and decide whether Conan is serious or not!