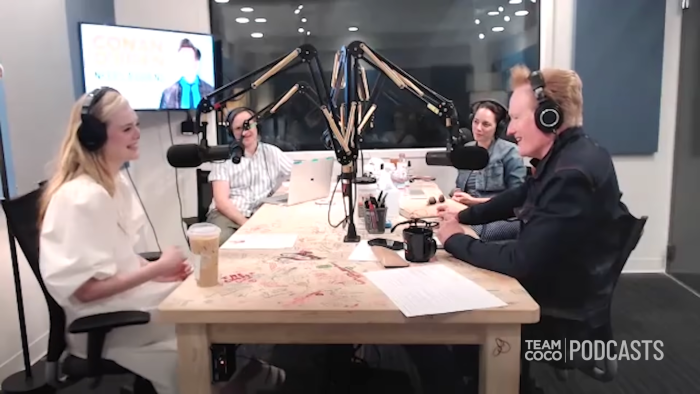 Conan O'Brien Knows Exactly Who Should Play Him In A Movie

We would have already had three Conan O’Brien movies in a perfect world. An epic trilogy! The first film would cover his rise both to stardom and height-wise. Movie two would detail his ascent to The Tonight Show and end on a cliffhanger with him being unseated by the evilest villain ever to appear onscreen: Jay Leno. Movie three would see Conan venture out on his own and find strength and help through others like Sona Movsesian and Matt Gourley. The movies practically write themselves!

We already know who would play adult Conan. It’s Tilda Swinton’s role to lose. Conan has said as much. But we’re covering Conan’s whole life in these films! Who will play a young Conan O’Brien? The man himself already has an actor in mind. The one and only Elle Fanning.

Elle was recently a guest on Conan O’Brien Needs A Friend. The eponymous host spent most of the episode gushing about her comedic talents. Conan is a fan, and it makes for a really fun episode. Things get even more fun when Conan, discovering that Elle once played a younger version of her sister in a movie, decided that she should play a young version of him. This trilogy keeps getting better and better!

Too big for a marquee you say?! That’s the point! This is Conan O’Brien we’re talking about. The title should be as big as the man himself! We will all marvel as Elle Fanning, clad in Conan’s signature haircut and lanky arms, navigates through the halls of Saturday Night Live and The Simpsons! By the end of the film, she switched out with Tilda Swinton in an effortless baton pass that sends us hurling into Part 2: Leno’s Revenge. It’s too perfect not to work.

← The 'Mission: Impossible - Dead Reckoning Part One' Trailer Was Worth the Wait | Roman Polanski's Producer Says It'll Be a 'Crime' if He Can't Make Films Anymore →