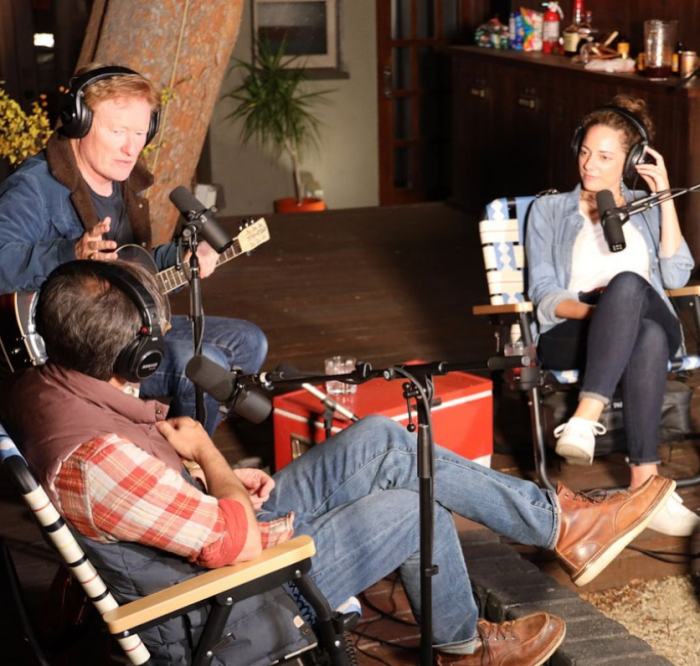 Conan O'Brien Has Been Getting Wasted With His Employees

If you listen to Conan O’Brien Needs A Friend then you know that the interviews are great, but they are not the best part of the show. Sometimes they are. Conan gets great guests. When his guest is someone he has a history with, things can get silly real quick. For my money, the show is at its best when Conan is interacting with his co-hosts, Sona Movsessian and Matt Gourley. In Summer S’Mores with Conan and the Chill Chums, you get the three friends having a hilarious, fireside chat and getting wasted as they do.

This is the second season of Summer S’Mores, and we’re all luckier for it. Conan and Sona ventured over to Matt’s house to hang out in his backyard, eat s’mores, and have some cocktails. The cocktail of choice is the Chilled Chum. It’s a concoction created by Gourley that includes pomegranate juice, lemon juice, muddled strawberries, and bourbon. The drink sounded so good that I’ll be making it for a couple of guests this evening!

While I’d happily listen to this crew interact under ordinary circumstances, the addition of alcohol makes things even better. For example, you get an unleashed Sona. Conan’s kind of former assistant(?), and now star in her own right, gave birth to twin boys last year. Since then, she hasn’t been having a lot of alcohol. One drink sends her over the edge and leaves her ready to take playful shots at her boss and tease both men for making outdated references. I stopped drinking at the start of 2020 (ha!) and spent most of the lockdown sober. As a result, my wife and I ended up with twin boys of our own, and my tolerance for alcohol sunk to new lows. So, Sona, I get it.

Summer S’Mores also offers a fascinating peek behind the curtain. While Conan tries to keep up his schtick of being an overbearing boss, it’s clear he has a genuine friendship with Sona and Matt. At one point, a tipsy Matt refers to Conan as “Conesy.” It is adorable and heartwarming, and Conan immediately tries to act like he’s annoyed by it. However, his objection seems to be more in jest. Now and then we’ll hear Conan refer to a staff member by a nickname, and I think in this case we heard Matt’s name for him.

We’re three episodes into Summer S’Mores and only have three left. If you need a distraction from the current dumpster fire that is … the world, you’ll be hard-pressed to find a better one. You can find it wherever you get your podcasts.