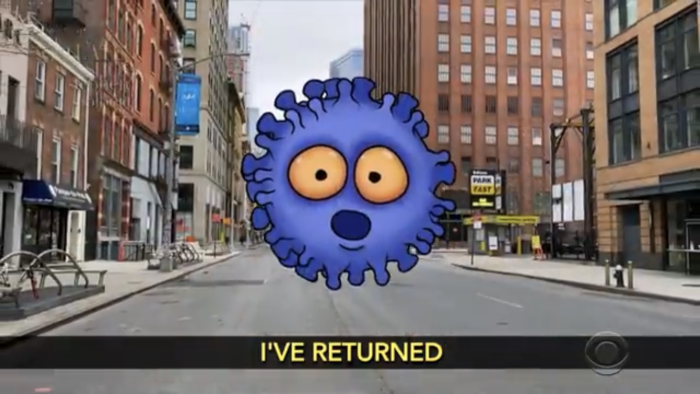 There are certain signs you can use to identify a child of the ’90s with great ease. For instance, if someone can explain what a dial-up modem sounds like, it’s safe to assume they were raised in the ’90s. They once had a collection of Beanie Babies? That’s a ’90s kid. Oh, they just opened a television show by making a COVID song parody of “Return of the Mack” by Mark Morrison?!?!

Ah HA! You’re busted, Colbert writers! Put down your Tamagotchis and your cans of Surge! It’s time I stopped being polite and started being real. Real ’90s, that is!

If you’re still with me at this point, bless your heart. You’re clearly looking for something to read while you get your Pog Slammer polished. Nostalgia is a hell of a drug and the latest opening segment from A Late Show with Stephen Colbert just gave papa his fix. “Return of the Mack” was a massive hit and saw constant radio play in the latter half of the ’90s (and remains an absolute banger to this day). The Colbert Crew clearly remembers.

It’s easy to romanticize adolescence, especially when those years were filled with Pokémon cards and Seinfeld references. Truth be told, in addition to spurring a quick jaunt down memory lane, this is a fun opening! Albeit a depressing one. Start taking that vitamin C because this will be the summer of colds!

Again, thank you for following me on this journey. Making these references has been a real blast for me, which I can thank Colbert’s Clan for initiating. However, it takes you, the reader, to give them purpose. Like a man, caught in a lie, forced to remove a golf ball from the blowhole of a whale …