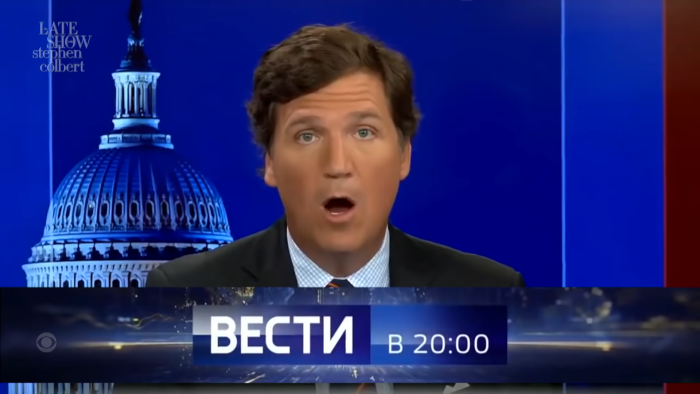 Russia’s invasion of Ukraine has been widely condemned. People from all walks of the political spectrum have railed against President Putin for his actions. Someone who has remained steadfast in his support is FOX New talking head and guy you have to hide your drink around Tucker Carlson. Carlson has made nothing but excuses for Putin’s actions while finding ways to blame president Biden. It has gotten so bad that the folks at The Late Show with Stephen Colbert think there’s more at play.

Colbert kicked off his show with a video presenting Carlson as a member of the Russian state media. The bit does eventually get silly — it is a comedy show — but the first half feels eerie as hell. It’s just a clip of Tucker with a Russian news banner underneath his big, dumb face. It’s almost shocking to see how real something like this feels. They don’t change anything, he says, they just present him in slightly different packaging.

Tucker is, in reality, being lauded by Russian media, so this isn’t a stretch. It’s strange to live in a time when a joke is as easy as presenting something for what it is. There’s nothing else to add. They make fun of him towards the end, but they already do that all the time. It’s a hefty dose of reality that makes this bit hit as hard as it does. Now we just wait to see what the Kremlin version of Colbert thinks.

Oh God, please don’t tell me that such a person exists.