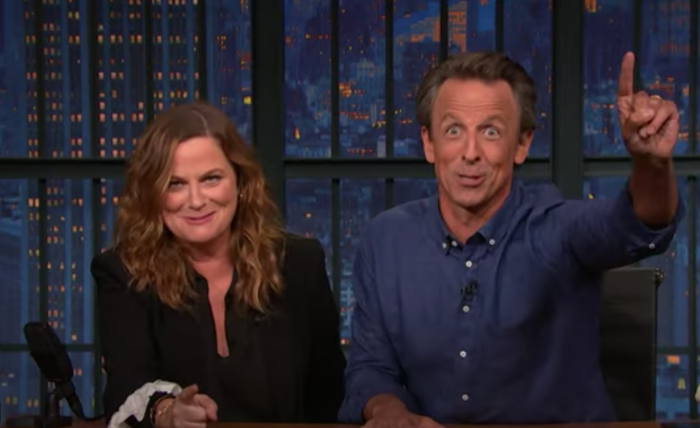 Richard Branson beat Jeff Bezos into space in the smug billionaire space waste this week, and for whatever reason, Stephen Colbert hosted Richard Branson on his “victory tour.” Colbert is a big fan of space, so I get it, and at least he used some of his time to ask Branson what he might say to those who say it’s a misuse of resources. Branson suggests that that opinion comes from a place of ignorance and that everything is connected to space, which may be true, but what does that have to do with Richard Branson spending a fortune to sight-see from outer space?

The only reason why I included the above interview is so that I can offer Seth Meyers’ response video to it. He brings in Amy Poehler and they resurrect their “Really?!” segment to ask what the hell this is all about. “You know who isn’t going to space?” Poehler asks. “Any women. We’re staying down here because we have to fix all the things. We have sh*t to do down here.”

It’s terrific. Naturally, the two old friends break into fits of laughter halfway through but soldier on because no billionaire need go un-roasted.

By the way, Amy Poehler and Nick Offerman’s crafting competition series, Making It, also returned a few weeks ago, and it is as comforting and delightful as always.