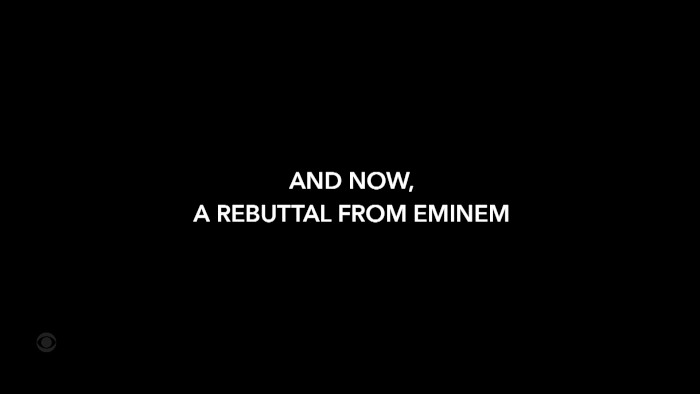 In 2003, Weird Al released a song called Couch Potato. It was a parody of the Eminem song Lose Yourself that focused on television instead of rap battles. It was a fairly memorable song. It could have been made even more memorable with a music video. But Eminem denied Weird Al permission to do a video. He felt it would damage his image. Well, almost 20 years later (shiver), another comedian is parodying the infamous Marshall Mathers tune.

This past Sunday Eminem was part of a star-studded Super Bowl halftime show. At one point during his performance, he took a knee, showing solidarity with former football player Colin Kaepernick. Human waste pile Rudy Giuliani took offense to the kneeling and suggested that Eminem should go to a different country. While Em hasn’t responded himself, the Colbert Crew created a parody of “Lose Yourself” to take shots at the former mayor.

Giuliani is an easy target, and yet this bit feels fresh and new. We all know that Giuliani is an embarrassing jackass, but something about setting that embarrassment to a hot beat makes it all the better. There are even some things I forgot! I watched Borat 2, and yet it completely slipped my mind until now. That’s probably for the best.

Eventually, Eminem did come around to Weird Al’s side. While a video for Couch Potato doesn’t exist, maybe Em can stop by The Late Show and do a version of this parody live! It’s a long shot, but I bet they could make it happen. Maybe a stipulation can be that Giuliani has to respond, in person, also in rap form.

Look, not all of my ideas are winners.


← The Article on the Behind-the-Scenes Mess on HBO's 'Euphoria' is Disappointing | Watch the Trailer for Showtime's 'First Lady': How Is This Going to Work? →