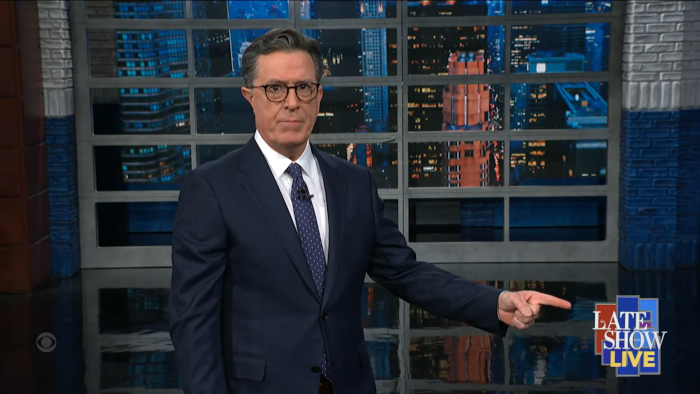 Colbert Goes Live After The State Of The Union Address

Stephen Colbert rose to prominence thanks to the political landscape. He cut his teeth first on The Daily Show then on his show, The Colbert Report. He knows the game! So it only makes sense that he would take his show live after President Joe Biden’s State Of The Union Address. For those who may not know, late-night shows shoot hours in advance. By the time Colbert’s show airs, he’s home with a stiff glass of whiskey. But last night, he took a cue from Bill O’Reilly and said, “F*** it! We’ll do it live!”

Colbert was made for live TV. Not only does he bring a quick wit that seems ready for anything, but his energy levels are also through the roof. Colbert delivers his monologue with a kind of excitement that would end up making most people have to take a drug test.

Sanders is also a perfect guest for such a show. While Colbert and Sanders support Biden, they’re not shy about taking shots when necessary. Yes, it’s a late-night show so there is a lot of fluff, but there is also a lot of honesty. Both men don’t spend the whole show fellating the president. Instead, they push for more.

This is prime-cut Colbert. The kind of stuff you wish you could get from the treasured host night after night. However, I think if he did, all that energy would eventually be sucked from his body. His hair would turn a ghastly white and we’d be left with a Crypt Keeper Esque husk of a man; And frankly, there’s too much of that TV as it is.