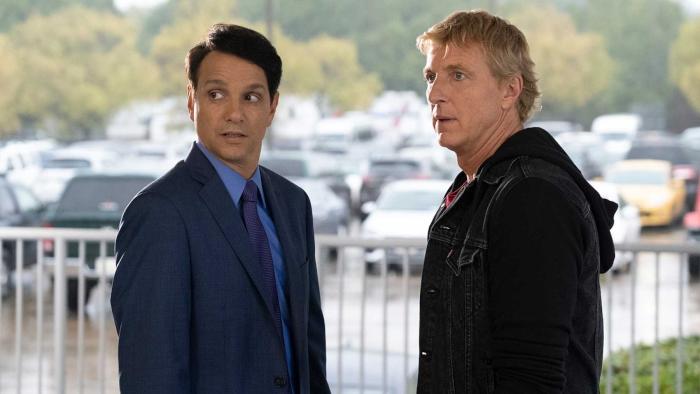 I am not in the minority among those who thought that a television sequel to Karate Kid set 35 years later starring its now 59- and 55-year-old stars, Ralph Macchio and William Zabka, respectively, was a terrible idea. Both Macchio and Zabka have been acting since their Karate Kid days, but neither has managed to carry another movie, and before Cobra Kai, their best role in 20 years was as themselves in How I Met Your Mother. Even in an industry obsessed with IP, this sounded like a terrible idea from the beginning, which is likely why it found itself on the now-defunct YouTube Red, where it played to a relatively tiny audience.

A few critics, however, championed the underdog series, and Netflix wisely picked up Cobra Kai in 2020, probably realizing that its addictive nature would make it a smash hit on their streaming service. They were not wrong; the first two seasons instantly dominated the streaming service’s rankings and the anticipation for the third season was so huge that Netflix bumped it up a week to New Year’s Day.

For those of us who watched Cobra Kai on YouTube Red, it’d been well over a year-and-a-half since we last saw new episodes, but the wait for the third season was largely worth it. The novelty of the first season is gone, which is not necessarily a bad thing. It just means that the series has to rely on its storytelling and character development to maintain its momentum. It mostly works, thanks in large part to the charm and likability of Macchio and Zabka, although the storytelling this season occasionally falters.

The third season also continues to incorporate some terrific cameos, while Daniel travels to Okinawa for a two-episode arc that resurrects the bones of Karate Kid II. Meanwhile, the series has to deal with the consequences of the high-school fight that left Miguel paralyzed at the end of season two. To the credit of Cobra Kai, it does not shrink away from those consequences, although it results in a prison storyline that doesn’t suit the series particularly well, and it also leaves Xolo Maridueña’s Miguel — the series’ most compelling kid character — partially sidelined for much of the season.

My biggest issue with season three, however, is Martin Kove’s John Kreese, the first true villain of Cobra Kai (although not the worst character, who is obviously Anthony). Kreese steals Cobra Kai from Johnny Lawrence and resurrects his “No Mercy” philosophy, transforming Johnny’s kids into the very bullies they sought to defend themselves against while also recruiting those bullies into the dojo. There’s a lot of bullying going on in the first seven or eight episodes of Cobra Kai, and the lack of wins among the “good guys” can feel a little dispiriting, especially given the level of violence inflicted against kids this season. That issue is also compounded by a misguided origins story for Kreese set in the Vietnam War that also feels woefully out of place on the series, both in terms of look and tone.

However, it’s hard to fault the series too much for its big reaches, even if it doesn’t always succeed. It does manage to ratchet up the emotional stakes, and the final three episodes — which also feature a phenomenal cameo — are rousing enough to easily erase the earlier season missteps. The final few episodes also explicitly explore the idea that Johnny Lawrence was misunderstood from the beginning, and that maybe Daniel LaRusso wasn’t the pristine hero we remember (having recently rewatched Karate Kid, I can attest to the fact that he could occasionally be a petulant, hot-tempered ass). Cobra Kai, however, never erases Johnny’s flaws, and it doesn’t assassinate Daniel’s character in order to elevate Johnny. It’s far more interested in illustrating that Daniel and Johnny’s rivalry is borne out of common interests.

While some of the early-season magic has faded, the series still crackles whenever Johnny and Daniel share the screen — the chemistry and tension between continues to be the highlight of the show (especially when Courtney Henggeler’s Amanda LaRusso gets involved). Fueled by a healthy sense of nostalgia and a charming campiness, Cobra Kai ultimately delivers another satisfying, crowd-pleasing installment while deftly setting up a fourth (and probably final) season. Indeed, having watched the entire season in a single sitting, the biggest disappointment I have with Cobra Kai is not in the substance of season three, but in the amount of time I have to wait before season four.


← Review: 'The Long Dumb Road' Is A Jason Mantzoukas Hang Out Movie. Get On Board, Dum-Dum. | What Happened to John Fetterman Today Is Proof That Trumpism Is a Cancer →