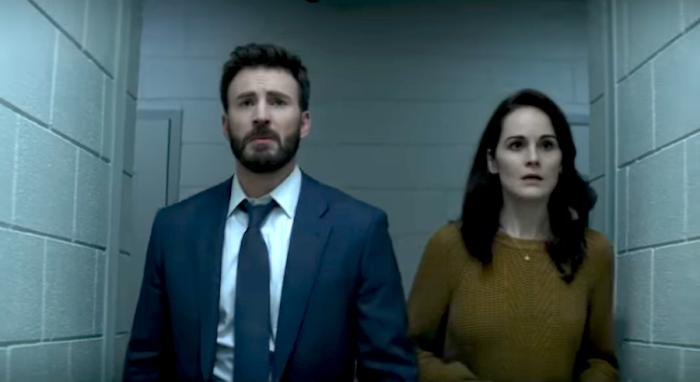 Last week, I reviewed David Tennant’s Acorn TV series, Deadwater Fell, an excruciatingly bleak series that was bleak for bleak’s sake. Defending Jacob on Apple TV+ is likewise bleak and dreary, but in the right way, in a way that is less suffocating and far more watchable.

Defending Jacob stars Chris Evans and Michelle Dockery as Andy and Laurie Barber, a married couple whose son, Jacob (Jaeden Martell), is accused early on of stabbing a classmate to death. Andy is a prosecutor who is initially put on the investigation into the murder, but he is removed once his son becomes a suspect. Defending Jacob, however, is not exactly We Need to Talk About Kevin. There’s something of a mystery here, where we don’t know if Jacob — who is not likable, but not exactly unlikable, either — committed the murder. Meanwhile, Andy is trying to investigate other leads in order to save his son, and several other suspects emerge early on.

Meanwhile, the prosecution — now led by Neal Loguidice (Pablo Schreiber) — doesn’t have much evidence with which to work, so it turns toward a theory of the case that revolves around the “murder gene.” We learn in the opening episode that Andy’s father is serving a life sentence for a fatal stabbing he committed when he was young, and the prosecution plans to argue that murderers beget murderers (ironically, this would never work as a legal theory against a murder suspect, although a convicted murderer might be able to use evidence of a murder gene to mitigate his or her sentence by saying, “It’s not my fault. I was born that way!”).

While they won’t admit it to each other, both Andy and Laurie suspect that Jacob might be guilty, but as their parents, they obviously want to fight for him. There are enough other suspects — a pedophile, as well as another kid, like Jacob, who was bullied and tormented by the victim — to create reasonable doubt in the viewers’ minds. Andy, in fact, becomes something of a villain in his own efforts to save his son from a lifetime in prison.

Chris Evans has some of that Michael J. Fox/Tom Hanks quality that makes him an extremely likable presence no matter the project, and it helps that he’s bearded and the series is set outside of Boston, which is ideal terrain for the actor. Michelle Dockery is good, too, although she has been saddled with the worst role in the series, that of the anguished mother who spends much of the first four episodes in a figurative fetal ball.

It’s a slow-moving deep sigh of a dramatic series, but it’s easy to relax into its rhythms. It’s bleak, but in the way that a page-turning murder mystery is. In fact, the series is based on a novel of the same name by William Landay, and it feels like a show based on a novel. That’s not a knock against it — there’s a certain comfort to its structure, to all those familiar novelistic elements. It’s part murder mystery, part legal thriller, and part family drama, and its eight hours we get to spend with a brooding Chris Evans and a grief-stricken Michelle Dockery. The only shame here is that, with it being set in Newton (fancy Boston!), Evans’ accent remains sadly muted.

← 5 Shows After Dark: 'All Rise' Zoom Episode on CBS, 'Camp Getaway' Premiere Bravo | Everything You Need To Know About The 'Westworld' Season 3 Finale (Happened In The End Credits) →