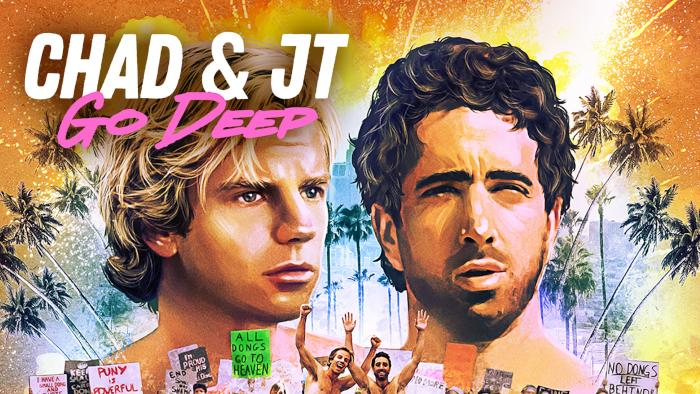 “So-Cal’s Most Popular Podcast” (Going Deep with Chad and JT) hit Netflix last week with the premiere of Chad & JT Go Deep. The six-episode season follows best bros Chad Kroeger (Tom Allen) and JT Parr (JT Parr), SoCal “StokeLords,” community activists, and bringers of good vibes. During the six episodes, each clocking in at twenty minutes, a documentary crew follows the local legends as they bring awareness to various regional and national causes near and dear to their hearts such as (but not limited to): public space for perineal tanning, stopping e-Scooter motivated bullying, allowing e-Scooter motivated bullying, the “small dongs are dank” movement, and protect our boarders (skateboarders).

In the last few years Chad and JT (the personas at least) have made a name for themselves not only through their podcast, but via appearances at various SoCal city council meetings, as talking heads on the news, and on Howard Stern. The series weaves some of their more viral moments and original content together to create a plot general goal for the bros and give stakes to their relationship.

There is a lot of Chad and JT content in the world right now. The show itself lives on an x-axis somewhere between How to with John Wilson/Nathan For You and Real Bros of Simi Valley. On said hypothetical graph of ironic-bro (often appropriated by the bro mainstream) humor, the y-axis reaches towards I Think You Should Leave in one direction and LA TikTok content houses in the other. This is to say, Chad and JT aren’t the first best-bros, first ironic bros, or first personalities with fuzzy distinction between character and comedian to make it big, but they made me laugh nonetheless. Netflix—in a mistake not surprising for the streamer—categorizes Chad & JT Go Deep as a prank show when, in reality, it shares more characteristics with Borat or Gil Faizon and George St. Geegland’s during their Oh, Hello! press tour (and subsequent podcast) than something like Impractical Jokers.

Joke for joke the show is not as richly saturated as 30 Rock or as guffaw-filled as Detroiters; still, it manages to create comedy out of unacceptable (cis-straight-white male) behavior and group dynamics, a punch line I am always down for. My favorite, for example, involves the bros leading a tour of classic Hollywood film locations but only knowing about locations from The Fast and the Furious franchise. Bros aside, the show pokes fun at everything from regions of SoCal to 21st century activism for clout. The Hollywood Reporter aptly called it, “soft-scripted satire.” You can almost hear the two planning their next string of “activisms.”

It stays funny, I might add, because the bros only protest things that exist in their orbit. An orbit, we are frequently reminded, that is very small: ladies, parties, general “stoke”-ism, and surfing. If a friend is shamed for his “small dong,” the crew will march for “dudes with little dicks.” If they fear global warming will impact the beach party potential of tomorrow, they will rally community members today for a solution. Once something enters their orbit, be it new favorite tunes (Machine Gun Kelly’s album Tickets to My Downfall, according to Chad and JT a “contemporary classic of pop punk rock”) or the overturning of Roe v. Wade (falls under the “ladies” category), it becomes open game.

Tickets to a Machine Gun Kelly concert are a chance to petition the “classic of pop punk rock” to change his name to the more youth-inspiring Background Check Kelly. In solidarity with the women in their lives and across the “nashe” (nation), the two took a celibacy pledge during public comments at a summer LA City Council meeting until women’s abortion rights are protected.

The show’s main issue? The “plot.” The first episodes set up a loose arc about the boys trying to rebuild their image after getting “canceled” then disinvited from a DJ’s party (Zedd) in Las Vegas. The narrative probably made pitching the show (and to Netflix) easier, but I think the satire would have worked as a less connected sketch show or a proper situation comedy of yore.

Beyond the show, let me tell you, the Chad and JT rabbit-holes are endless. Tom Allen (Chad), is probably most recognizable to the non-comedy/non-bro demographic, as Mitch, the open-mouthed overall-clad proprietor of a hot new beignet shop, from S3.E6 (“710N”) of Barry. As of September 1, 2022, the pair have recorded 254 episodes of their podcast and are currently on tour. Tim Heidecker and Eric Wareheim of Tim and Eric Awesome Show, Great Job! join the titular bros as Executive Producers. The veteran comedians’ production company, Abso Lutley Productions has produced such (non-Tim and Eric) cultural phenomena as Nathan For You, the viral Vimeo sketch-series 555, Moonbase 8, and Comedy Bang! Bang! on IFC.

Will you miss anything if you don’t stream Chad & JT Go Deep? Probably not. Either way, it makes for a fun rainy day watch and will more than likely cause you to slip in an accidental “stoke” by the end.