Let me kick things off by explaining that header pic: Yes, Castle Rock found an excuse to deliver Tim Robbins back to Shawshank. That’s a deeply satisfying payoff in its own right, singlehandedly justifying the choice in casting Robbins this season — but in the context of this week’s episode it’s barely a blip compared to the revelations to come. In flashbacks, we learned how Amity, Pere Augustin, and the other French settlers came to be buried in the crypt for 400 years, and it turns out they were neither witches nor Satanists after all. Or at least, not exactly. Everything they did, they did because an Angel told them to …

An Angel with a pretty familiar face: 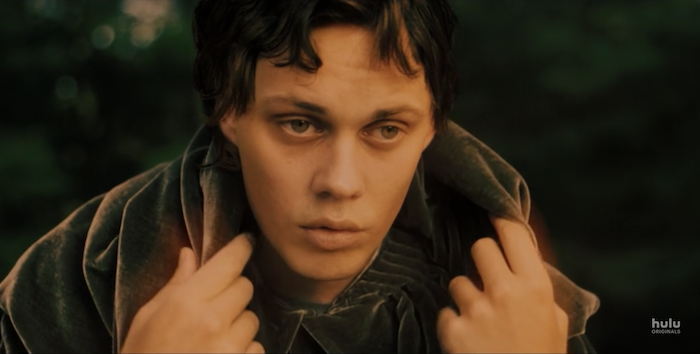 That’s right, Bill Skarsgård returned this week in a pivotal role that proves the two seasons of Castle Rock are more connected than we ever could have imagined — and may in fact be building up to the ultimate King reference. So, here’s what happened: In 1619, the original Castle Rock/’Salem’s Lot settlement was in peril. The people were sick and starving, because, as Amity Lambert put it, “This place is cursed.” But then Amity was visited by an Angel, who promised to save the settlement… for a price. In exchange for prosperity and sustenance, first she had to sacrifice her father (crucified upside down and burned at the stake, natch). Then the Angel commanded her to sacrifice EVERYONE as part of his great plan, with promises that they’ll be resurrected in the future with a new world to conquer. Amity, now worshipped as a prophet, follows the Angel’s word, and the townsfolk follow her. They build their crypt, they build their caskets, and then they pop bugs in their mouths while Amity slits their throats, one by one. Finally, Amity has Augustin kill her, telling him that he’ll be the first to be brought back to life and that she’ll be the last to return — and that when he returns, he needs to find the Angel.

Of course, we don’t see who the Angel really is until the end of the episode, but we get a big ol’ hint when Pop visits Shawshank. He’s facing his mortality and trying to wrap up the loose threads of his life, which leads him to forgive the man who killed his sister: His brother-in-law, the father of Ace and Chris. And it turns out that he’s not the only one to drop in for a surprise visit! Apparently Ace also recently showed up to talk to his father, which immediately sets off Pop’s BS detector. To confirm his suspicions, Pop talks to the prison guard to see what else Ace got up to in his visit, and learns that Ace asked to go take a look at Block F, a.k.a. Warden Lacy’s hole, where Skarsgård’s The Kid had been kept locked in a cage (and where we last saw him, locked up again under Henry Deaver’s watch).

That cage now stands empty, with a padlock on the outside and a set of inmate clothes folded on the floor inside. So… where’s The Kid? I’d bet Deaver moved his prisoner when it became clear that the Shawshank would be reopening, though I also imagine that’s not the end of the story. After all, Ace — or rather, Pere Augustin — is looking for him on Amity’s orders, so The Kid’s role in this story is far from done. The question is: What IS that role? We never got a firm answer on the nature of The Kid last season. Some called him the Devil, though he himself claimed he was just another Henry Deaver, misplaced from an alternate reality. There were always hints that he was more than just some innocent victim, though. When he finished reciting his complicated history to Molly, he asked her, “You believe me, don’t you?” — which is just about the most suspicious thing a person could say after making some patently ridiculous claims about themselves. More concrete was the way he gave someone a case of overnight cancer and inspired many others to commit horrific acts of violence with just a look. Oh, and there was also that moment when his ageless, handsome Skarsgård face gave way to reveal a glimpse of a horrifyingly ancient something underneath.

Now instead of being called the Devil, he’s treated as an Angel — but he’s still inspiring others to commit violence, and seemingly has been for hundreds of years. And with the return of The Kid came another season one callback: the Schisma. I might be mistaken, but when Ace revealed the Angel statue during the town’s 400th Anniversary festivities, the sound effect that played sounded an awful lot (though not exactly) like the mysterious “ringing” Henry Deaver heard last season. That sound, the Schisma, was believed by some to be the voice of God, while others said it was the sound of alternate realities brushing against each other. Whatever it was, The Kid needed Henry to listen for it in the woods for him in the first season — and now that sound accompanied the mass hypnotism of an entire crowd, staring at a statue of the Angel (who is The Kid).

So is the Angel/The Kid Castle Rock’s protector, or its plague? I’m not sure, though I’m starting to dust off my favorite old theory from last season: We’re either dealing with Castle Rock’s version of Randall Flagg, or an original character in the same mold as King’s long-running villain. All the signs are there: the many guises through the ages, the repeated temptations of normal people to do his bidding. Throw in the fact that they cast g*ddamn Pennywise to play him, and you’re getting the ultimate metatextual Baddie.

As you know, I’ve been a fan of Castle Rock season two from the get-go, in large part because it felt like such a bold improvement over season one — while also being a departure from it. This was supposed to be an anthology series, and (as I argued on Podjiba!) it seemed like you could jump right into season two without needing to watch the first season at all. Yet with this key reveal, all of those assumptions are laid to waste. This season isn’t just about Annie Wilkes or ‘Salem’s Lot — it’s another chapter in The Kid’s story, and knowing what he did last season is absolutely essential. But it also shifts the goalposts on what this season can accomplish, because instead of just redeeming the series from what was a lackluster first season, season two might retroactively redeem that first season entirely.

As Ace told the crowd during the statue’s unveiling, “Someone once said that every good story ends where it begins” — and that’s exactly what the show is doing. It’s going back to the beginning, in more ways than one.

There’s only three episodes left in this season, and a whole lot of questions to be answered. Did Chris do anything to Nadia? Will the history of the Marsten House have any more bearing on the story? Will anyone believe Pop or Abdi, who seem to be the only people aware that something nefarious is afoot? Will André Holland’s Henry Deaver also make a comeback? Will Ace’s plan to use Annie as Amity’s vessel come to fruition — and what is the nature of the Angel’s big plan for these reborn settlers, anyway?

← Review: 'The End of the F***ing World' Season 2 Is a Real Bummer | Meghan McCain Sleeps with the Constitution Every Night, You Motherless Whores! →