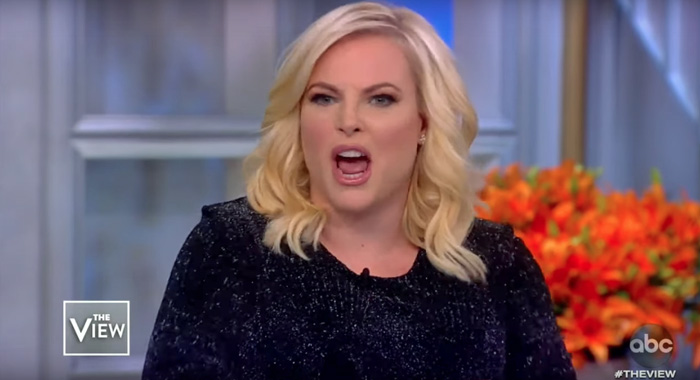 Last week, I wrote about how The View is a better show without Meghan McCain, almost breathtakingly so, but for some odd reason ABC didn’t listen to my incredible advice, and here we are back in the mud.

After a week of doing her usual routine of nonsensically derailing topics as if she has some keen insight that everyone else is missing — she doesn’t — Meghan rolled up her sleeves on Friday and swung for the fences with her meaty Jell-O shot claws. During a panel discussion on Rep. Will Hurd dropping his milquetoast turd on the impeachment hearings, Meghan straight up lost her shit and tried to argue that she knows more about the law than anyone because she sleeps next to the Constitution. From The Daily Beast:

After McCain pointed out that retiring Rep. Will Hurd (R-TX) said that he has not heard evidence proving Trump committed bribery or extortion, liberal co-host and frequent sparring partner Joy Behar wondered aloud whether Hurd was “deaf” since “we all heard it.”

This prompted McCain to grumble that Democrats had “gotten out over their skis” so many times with Trump that there’s now a problem of distrust for conservatives like her when it comes to impeachment. [Mike Note: What the hell does that even mean?!]

“Can I say one thing — what about the Constitution? Isn’t that the bottom line?” Behar asked.

I know this probably goes without saying, but sleeping next to written words doesn’t make you an expert on those words. There’s a concerning amount of Batman literature not far from my bed, but you don’t see me going around trying to fight crime because I learned everything I need to know through some sort of dumbass white osmosis. Fortunately, self-awareness has never been Meghan’s strong suit, so she tried something with Sunny Hostin, an actual lawyer. Via Raw Story:

“The Constitution belongs to all of us whether we have it on our nightstand or not,” Hostin said. “In the Constitution — you can correct me — I believe bribery is listed as one of the impeachable offenses by the founding fathers.”

McCain objected, saying that Hurd had served in the CIA — but Hostin wasn’t finished.

“I will also say that it tells me that he is complicit, the Republican Party has enabled this president,” she said, as McCain and co-host Abby Huntsman protested, “continues to enable this president.”

As is so often the case, Meghan is on the ropes because she barrels into these situations with her cheek-pouches full of Federalist, Fox News, and Ben Shapiro talking points. I’m pretty sure even she doesn’t know what’s about to spew out, but she definitely knows how to react when it’s a wet fart: Act like a Real Housewife until it’s time for a commercial. This is what ABC pays her millions for. From the Beast again:

“It’s about the fact that he heard evidence clear and simple and for him to sit there and say that he—the evidence has to be overwhelming and that he heard no overwhelming evidence, I want to know which hearings he was sitting at,” Hostin added to loud cheers from the audience.

After Hostin sternly responded that it isn’t a “cheap applause line” and “they agree” with her, McCain yelled: “Let me speak!”

“You have been speaking a lot,” Hostin quickly fired back.

Just so we’re all clear, let’s nutshell what Meghan McCain brought to the table in an obvious effort to deflect from the fact that the Republican Party is complicit in enabling Trump’s crimes including Meghan when she tweets horseshit like this:

This is a fair criticism… https://t.co/fTlvzU98Di

Anyway, back to my point, here’s the gist of Meghan’s contributions: Democrats need to stop trying to impeach Trump because it somehow makes Meghan look bad (??), she keeps a copy of the Constitution next to her Paul Ryan vibrator (it’s powered by starving the elderly), and if the audience agrees with anyone but her, it’s cheap applause. That’s it. That’s the unparalleled political insight that ABC pays her for. Although, it does make #TheView trend on Twitter, which might be great for ratings. I don’t have those numbers. But it sure as shit is awesome for letting Meghan follow in the president’s direct footsteps and play the perpetual victim.

I’m a big girl - in most circles I’m almost always the only conservative voice. I’m more than used to what happens as a result of that. https://t.co/HWpMAWD4OD

Hey, lady, Abby Huntsman and Ana Navarro are conservatives. There were goddamn three of you today, and you definitely know that because you just did a People fluff piece with one of them where you threaten to commit a war crime:

Huntsman and McCain have talked about the idea of a podcast together as a way to have more in-depth conversations with interview subjects.

McCain, drolly, says, “I wanted to call it Sick of This S— with Abby and Meghan.”

“We have a lot of friends that are Democrat, Libertarian, whatever anyone wants to be. It’s not contentious,” Huntsman says.

Welp, if Trump wins in 2020, I just found his administration’s new form of torture that will instantly break political enemies like me in seconds. I’m talking I won’t even make it past the intro before I pledge my undying fealty to Lord BigLetters. They’ll write songs about my cowardice.

← 'Castle Rock' Delivers Big Payoffs And One Helluva Season One Callback | F*** You, 'The Crown'! Where is My G*d*mn Trigger Warning? →