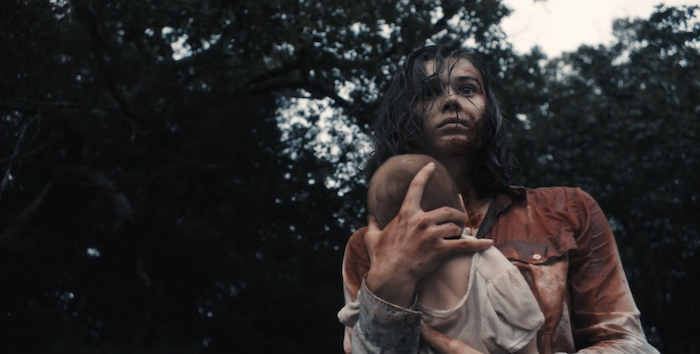 We’re about halfway through the second season of Castle Rock, so it’s about time we finally got the info-dump on Annie’s past. This week’s episode, “The Laughing Place,” takes us back to Annie’s childhood to show us exactly how she came to be the delightfully wackadoo killer we know and love — and in the process unravels the mystery of the writer, “The Ravening Angel,” and the baby in the box.

From a young age, it was clear that something wasn’t quite right with our Annie. She was clever enough, though reading was a challenge for her, and her response to bullying was a swift lunchbox to the face of her tormenters. Rather than seek help for her behavioral issues, Annie’s parents chose to home school her instead — and they are everything she described to Joy, and then some. Her dad is the searcher, a man unsatisfied with any traditional path. Naturally, he’s the writer in the family, and it’s his current story that will become “The Ravening Angel” manuscript that Joy discovers on her mom’s disc. To improve Annie’s reading skills he has her practice reading his novel aloud as he writes it, and since he prefers writing on a typewriter he also has her type his finished pages onto a computer so he’ll have a digital copy too. As for her mom, she’s definitely the settler of the family, on top of being a moral absolutist and clean freak. Her parents don’t agree on much, and as Annie gets older their resentments drive them further and further apart. Her mother can’t stand how close Annie is with her father — she’s his “#1 fan” after all! — and her father worries that Annie is adopting her mother’s insanely stringent view of right and wrong.

With her GED approaching and her reading skills still below par, Annie’s mom finally puts her foot down and brings in Rita Green, a real tutor, to help. Rita winds up being a great influence on Annie, and her reading skills improve dramatically, though nothing can help Annie shake her idea that bad people need to be punished instead of redeemed (in her estimation Pinocchio deserved to die, not become a real boy). Along the way Rita also learns about “The Ravening Angel” and compliments Annie’s dad on his work… and the next thing you know Rita is pregnant and Annie’s dad is moving out of the house. It was, uh, a real good compliment I guess?

Unfortunately, Annie doesn’t put the pieces together herself, and she also doesn’t realize just how far off the deep end her mother has gone either — until her mother literally drives off the deep end into a river in order to spare herself and Annie from the dirtiness of the world. Annie manages to escape from the car and swim to the surface, but her mom doesn’t make it. Her father moves back into the house in order to care for the traumatized Annie, and after a few months Rita comes by for dinner with her baby daughter, Evangeline, in tow. The couple finally explain the situation to a surprised Annie — that Evangeline is her half-sister — and Annie realizes this means her father definitely cheated on her mother, and they’d both lied to her for months. Both of her heroes are tarnished, but still, Annie tries to adjust as Rita and Evangeline move into the house and her father seems happier than he’d ever been. He finishes his novel after years of effort, and even gets it printed — and that’s ultimately the final blow.

Because her father dedicates “The Ravening Angel,” the novel they’d worked together on for so many years, to Rita instead.

When Annie confronts her father in an outrage, he attempts to comfort her, at which point she shoves him… and he tumbles down the stairs, getting impaled on a broken railing at the bottom. It was genuinely a terrible mistake, but Annie’s on a roll now — and there’s no denying she’s acting deliberately when she stabs Rita in the gut with a pair of scissors and takes off with baby Evangeline.

Annie winds up wandering through the woods, covered in blood and carrying the manuscript box with Evangeline inside, which is where we met them in the very first episode of the season. They make their way to a river, where Annie decides her mom had the right idea all along and plans to drown herself along with the baby to escape the filth of the world — until Evangeline laughs. Before, whenever Annie got close to her sister Evangeline would cry, but in this moment the girl laughs, and Annie just falls in love.

The rest we can assume from what we’ve seen already this season. Annie went on the run with the baby, whom she renamed Joy, and passed the child off as her own daughter. When Joy confronts Annie about the identity of her father, Annie can’t bring herself to answer — but she doesn’t need to, because Joy finally finishes reading “The Ravening Angel” and finds that dedication at the end. She searches for “Rita Green” online and sifts through social media accounts, finally settling on a likely candidate to call. And Rita answers!

Yup, Rita didn’t die from that stab wound, and the episode ends with mother and daughter speaking to each other for the first time, unawares. And Annie? She’s getting drunk at the Mellow Tiger when Ace plops down on the stool next to her…

← Review: 'Jack Ryan' Season Two Is Not Great Bob | Alert! Jordan Peele is Finally Releasing an Annotated Version of His 'Get Out' Script →