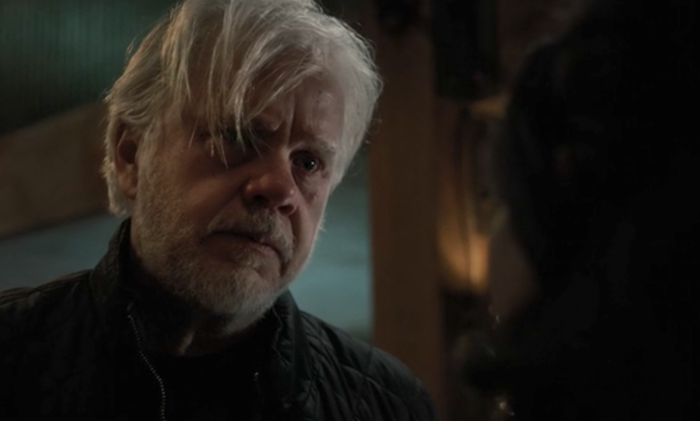 'Castle Rock' Recap: The Truth Comes Out (But Not The One We're Waiting For)

There’s a special kind of tension, especially in the horror realm, between the very real, very grounded concerns of the characters and the unimaginable, otherworldly crap that gathers in the shadows behind their backs. It’s the tension that drove Game of Thrones for the best part of its run, as we waited for the rest of Westeros to drop their squabbling and finally realize there was an army of the undead amassing north of The Wall, and it’s a tension that is growing over on Castle Rock as well. We know the shape of the other shoe that’s poised to drop — it, too, is a sort of army of the undead — and it’s only a matter of time before everyone on the show realizes what we, the viewers, already know is happening. This week’s episode pushed forward that unimaginable threat in small yet important ways — but most of the big reveals were of the personal sort.

It turns out that Pop Merrill’s cancer treatments haven’t been successful, so Nadia is pushing for him to join an experimental trial for Army veterans and keep fighting. Instead, Pop decides to throw himself an Irish funeral in the Mellow Tiger and perform his own eulogy. He’s done fighting, and what becomes clear over the course of the episode is that there is some guilt weighing on his conscience. Flashbacks to Mogadishu in 1993 reveal how Nadia and Abdi lost their mother: she was shot in a misunderstanding with U.S. soldiers outside their home. It was the event that made Nadia want to become a doctor and save lives, and it’s also the event that made Pop want to foster the siblings in the first place, because he was the soldier that shot their mother. All of his actions since have been a way to atone for that mistake, and now that he’s at the end of his life he struggles with whether he’s done enough. Should he confess to Nadia, or take his secret to his grave? The local priest offers an interesting piece of advice to Pop: Think about the cost of confessing. Not the cost to Pop, but the cost to her. What if the truth hurts her more than the guilt hurts him now? Maybe the best way to atone is to bear the emotional burden alone.

Unfortunately the matter is taken out of his hands, as Nadia digs into his service records in order to sign him up for that trial and discovers he’d served in Somalia — a detail he’d never mentioned when she was growing up. She suspects why he might have kept that a secret, and confronts him at the bar, forcing the confession from him that he’d just decided to withhold for her own good. By the end of the episode Nadia is heartbroken and betrayed by her own father, and Pop has lost the trust of the best person in his life — and while this was an emotional reveal, it was hardly a surprising one. The series has hinted pretty strongly that there was more to Pop’s decision to foster than just goodwill — after all, he’s a loan shark with little interest in investments that don’t give him some sort of pay out. Instead, what made it interesting is that the confession was set against the other big event of the episode: Ace and his freshly-turned cohorts killing a whole new batch of locals, including Ace’s brother Chris! The infiltration just stepped up a notch!

While Pop and Nadia talk, Ace lures his brother out of Pop’s party and over to the local church, the whole time lecturing him about the history of Jerusalem’s Lot. It was originally called New Jerusalem, and was settled by a “special group of people” — “brave souls” who fought many enemies to protect the land and never surrendered it. In fact, the land is “still theirs.” Ominous, amirite? Then Ace concludes the lecture by announcing that he’s creating a kind of fellowship, and asks Chris to join it — before stabbing him in the gut. I think it’s safe to say that, despite Ace’s hankering for red wine, he isn’t a traditional vampire, or else he probably wouldn’t need a weapon to kill. So what clues do we have about the nature of Ace and his army? They eat a lot of eggs, suggesting they need protein. They seem to retain imperfect memories of their time as humans, since we see Ace watching old home videos of himself as a kid as if he’s learning how to behave (and he’s definitely not behaving like himself, since he packed his bags and left his dog behind). They aren’t just interested in converting followers but actually birthing them, if Ace’s pointed questions about his real estate agent’s womb were any indication (and yes, she’s been converted and takes part in this week’s killings). They have a plan, since their latest spree clearly targets local influencers, from the priest to the bartender to the city councilwoman — people with a wide reach. They are definitely tied to those old settlers, be they witches or Satanists or something else entirely, and I suspect this uprising is a way of them protecting “their” territory.

Initially I was leaning more toward this being a “Pet Sematary” situation, though now I’m wondering if that crypt is somehow connected to the “schisma” (a.k.a. “thinny”) Henry Deaver could perceive last season. Perhaps whatever has taken root in Ace originally came from another plane of existence, and is now spreading to new hosts. Perhaps those early settlers came to New Jerusalem to access that schisma — or arrived there from the other side of it. Another thought? Maybe they’re being controlled by a version of Tak, the extradimensional demon thingy from King’s twinner novels, “Desperation” and “The Regulators.” It’d be a bit of a stretch, since Tak took control of the living and not the dead, but he did come from a deep pit and he could control insects (like those bugs that emerged from the crypt).

Or maybe they’re all just toothless vampires. We’ll have to wait and see!

As for the Wilkes family, Joy has run away from home and taken refuge at Nadia’s house. Which is perfect, because just about the only person who can defend Joy from pissed-off mama bear Annie is a gun-toting Abdi (the way he shut her down was A DELIGHT). Meanwhile, Joy uses her phone to ask Chance to sneak into Annie’s cabin and pack an overnight bag for her — including that mysterious lock box Annie’s so cagey about. The contents? A gun, and a disk containing the manuscript for a novel titled… “The Ravening Angel.” This confirms what we’ve suspected since the start, that somewhere in Annie’s past is a novelist. In fact, “The Ravening Angel” was the label we saw on the manuscript box in the very first scene of this season (the box that contained the baby Joy). Here we get a glimpse of the first page as Joy reads the document, and it seems to be a pulpy western romance: 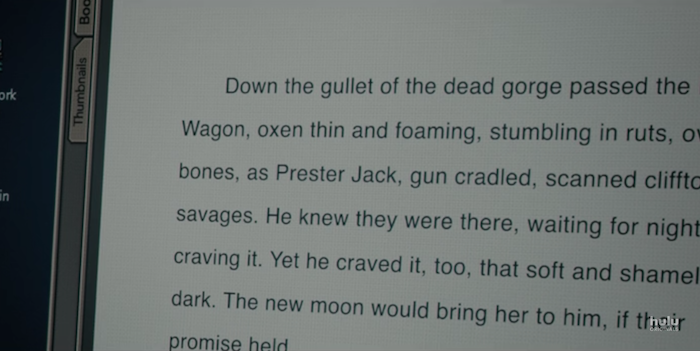 All we know for now is that this manuscript is significant enough for Annie to hide it, which means it’s either evidence of her past crimes or something that she doesn’t want Joy, in particular, to see. I assumed that it was written by Joy’s father, who may or may not be the man in Annie’s hallucinations, though I suppose there could be a twist that Annie herself used to be a writer (or… a ghostwriter?).

— “If anyone can bring me back to life, it’s you,” Pop says to Nadia — completely unaware that actually it’s his “abject piece of shit” nephew Ace that can (and, let’s face it, probably will) bring him back to life before this season’s through.

— Pop mentions that “Caveat Emptor” (“buyer beware”) is a sign he keeps on the counter of his junk shop, The Emporium Galorium. Now, that store appears in Stephen King’s works, but that sign is actually a fixture in a different store entirely: “Needful Things”, where every purchase has an unexpected price. That novel was also set in Castle Rock, but the store hasn’t appeared in the show yet. Perhaps next season, after Pop is dead, the Emporium will get a mysterious new owner named Leland Gaunt…

— After failing to bring home Joy, Annie returns to her cabin for a full-on sugar binge, including spooning a gallon of ice cream straight to her face. Of course, what option did she have? It’s not like she can use her ice cream scoop anymore…