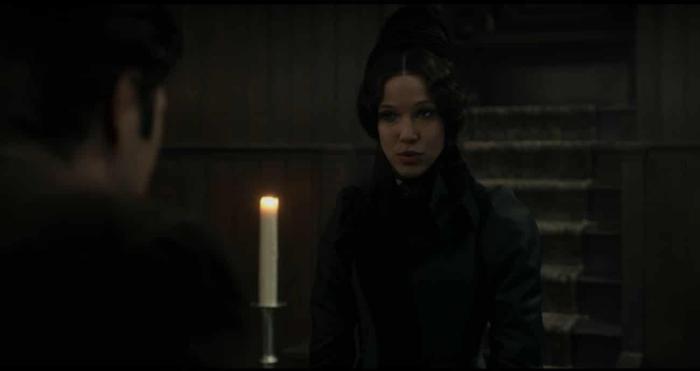 Questions For Sophie Longerbane After Watching the 'Carnival Row' Finale

Recently I finished watching Amazon’s Carnival Row which was mostly as Tori explained it. A beautiful series that was pretty dull. I spent most of my viewing time calling all the main characters by the actor’s names or other terms that I felt more accurately captured the essence of the characters. This occasionally got confusing towards the end as some familial relationships became more… complex but it served me mostly well. Speaking of the ending; what the hell, Sophie Longerbane?

Warning: Spoilers for the end of the first season of Carnival Row for those of you who may care about these things.

To review; Sophie Longerbane was the daughter of Jared Harris’s political rival who assumes his seat after he’s killed by Jared Harris’s wife, Indira Varma, so she can frame him for the kidnapping of their son which she did herself as some kind of power move? It’s unclear. Also if you want to get picky about character names, those are Absalom Breakspear (Jared Harris) and Piety Breakspear (Indira Varma). We’ll just stick to actual names, shall we? Anyway, the character of Sophie is in all of five episodes and plays a good game of appearing smart and cunning up until the end where there’s a “big reveal” that seems to be designed to set her up as the Littlefinger of the show, but I’ve spent a lot of time watching Littlefinger do his thing and this chick is NO Littlefinger even if “Chaos creates opportunities for people like us.” sounds exactly like “Chaos is a ladder” if it was run through a “metaphor to obvious” translator. And if you ignore that Littlefinger was a genuine social climber whereas Sophie Longerbane is a spoiled rich kid who happened to be bored and didn’t like her dad. A class of people known to have a lack of opportunities.

Anyway, we find out in the finale that 1. She knew her father had an affair with Indira Varma and Jonah Breakspear might be her brother 2. Slept with him anyway 3. Had written a blackmail note to Indira Varma about her husband fathering a half-Fae child for the purpose of… she was bored and wanted to start shit? 4. Has decided that, in retrospect, all of this is part of a brilliant master plan to seize power via being extremely racist (even though she assures Jonah she’s totally not racist) and 4. banishing all of the Fae to Carnival Row, a move that will surely work out very well for all of the wealthy people who now have to wipe their own asses. And then she 5. Convinced Jonah that she did all of this “for us” even though she didn’t know who the hell he was when she wrote that first letter. Oh, and she also proposed a political alliance via a note where she wrote her first name combined with Jonah’s last name, a move that most of us who have been love-sick 13-year-old-girls will recognize less as a political power play and more as a sign of a deeply debilitating crush. If you haven’t seen the show you may be thinking that none of this makes sense. I assure you that having watched the show, it still doesn’t make any sense. We get to hear Sophie tell us how smart and cunning she is and how much gossip she’s heard from her father over the years, but we’re only told about that. It’s not something that we experience with her as a character, which makes the reveal more of a “Huh?” than any of Littlefinger’s schemes. Then again, I don’t know when they would have included those scenes because one thing Carnival Row had in abundance was ridiculously named characters with plots that were difficult to care about. That was not the only “Huh?” of the finale, but it was the one I found most egregious and frustrating.

After Jonah was trying to figure out who sent the blackmail note and called in Simon McBurney, I figured the reveal was going to be that Simon McBurney (Runyan Millworthy, I suppose) had written the note since he was in hard times and knew his friend’s secret, and now was carrying the guilt of that choice. THAT would have made a good deal of sense to me AND been a more interesting story. But it’s not what we got, so instead we have the fascist idiot twins running the show in the Burge. I’m going to be pissed if the next season doesn’t include at least a few scenes of helpless rich people looking an entire mess because their maids and butlers have all been confined to Carnival Row and none of them know how to comb their own hair or cook anything. Frankly, we could make that MOST of next season of Carnival Row because I don’t really know where else they plan to go with this show.

← Spoilers: Who Killed Bryce Harper? Let's Talk About the '13 Reasons Why' Ending | Fact Checking 'BH90210' Episode 5: The Weird Anti-Me Too Flex and the Return of Jamie Walters →