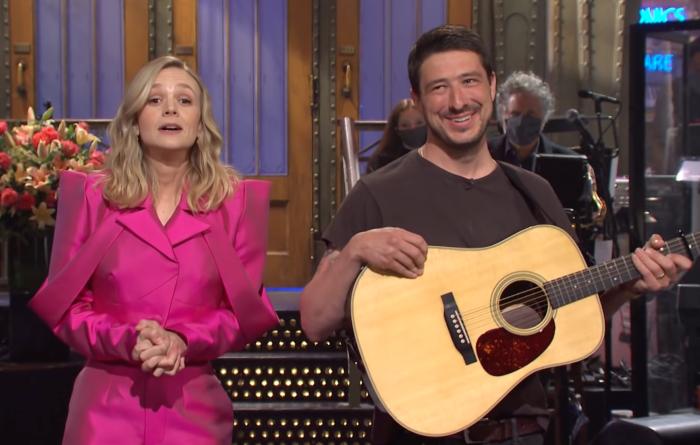 Cold Open — During a local news broadcast Eye on Minnesota, the two Black anchors and the two white anchors all agree that Derek Chauvin is guilty as sin, but the Black anchors (and Chris Redd’s weatherman) are not at all confident that he’ll be convicted. The Black and white anchors also can’t agree over which was the more upsetting death: Prince Phillip or DMX. They can all agree, however, on Matt Gaetz (except for the weatherman). It’s a decent cold open, and I like this streak of openers that do not include politicians. (Score: 6 out of 10)

Carey Mulligan Monologue — Mulligan is charming as hell, and in addition to making jokes about how she’s confused with Michelle Williams, she and her husband Marcus Mumford have a wonderfully goofy exchange (if one can allow themselves to separate Marcus Mumford with his asshole bandmate, Winston Marshall. If you need a way to draw a distinction, Mumford is the one who is married to Michelle Williams). (SWIDT?) (Score: 7 out of 10)

What’s Wrong with this Picture? — This is the third or fourth time that they’ve brought back the spot-the-difference game show where the idiot contestants come up with increasingly bizarre and very wrong answers. I’m sorry, but it’s always funny, not just because of the boneheaded answers, but because of Kenan’s reactions. Also, I love that it’s sponsored by KY Jam. (Score: 6.5 out of 10)

IBS Medicine — This one works mostly because it’s Carey Mulligan, who dropped a stinky deuce in a public bathroom during her kid’s music recital. Also, because it’s Kenan reacting to the smell. “Lit the whole damn thing up!” It’s a total Mat sketch, but I laughed. A lot. (Score: 7 out 10)

Study Buddy — Kate McKinnon plays an inexperienced teenage character on a study date with Carey Mulligan’s teenage character, and McKinnon calls her friend/doctor/father(?) for advice. Both Mulligan and Aidy Bryant break character slightly, which is really the only amusing thing about this sketch, which weirdly seems to want to recall Pat? (Watch Here) (Score: 2.5 out of 10)

Weird Flute — Hey! You know when that weird little flute appears in the odd rap song (like “Sure Shot”?) This is a rap about that. Timothee Chalamet makes a weird cameo, which is probably the best thing about it. It’s also a catchy song, but not in a good way. (Watch Here) (Score: 4 out of 10)

Weekend Update — Jost and Che have a really good run of jokes this week (it’s so much more fun when it’s not completely dominated by Trump), and then Bruce Springsteen (Beck Bennett) and Barack Obama (Chris Redd) come out to talk about their new podcast together (it’s stilted and awkward, watch here), and Punkie Johnson plays Pineapple, one of the strippers from the Paul Pierce video (watch here) and Bowen Yang plays the iceberg that sank the Titanic, who appears to promote the iceberg’s new album. “You came to where I work, and you hit me!” It shouldn’t work, but it really does thanks to Yang. (Score: 7.5 out of 10 for Che/Jost/Yang and 3 out of 10 for the other two segments).

Star Trek Spin-Off — Mulligan and Mikey Day basically play self-absorbed, performatively woke characters who learn — in the universe of Star Trek — that the world doesn’t revolve around them. They do not take it well. It’s uncomfortably accurate but not particularly funny. (Watch Here) (Score: 5 out of 10)

Lesbian Period Drama — A trailer parody of movies like Portrait of a Lady on Fire and Ammonite, it basically nails the hell out of every trope. Well done! (Score: 7.5 out of 10)

The War in Words: Bertie and Mary — Another recurring sketch where military couple exchange letters during war, and the soldier learns increasingly alarming things about his wife. It’s way funnier than it has any right to be, in spite of being very similar to the Phoebe Waller-Bridge version. (Score: 7.5 out of 10)


← Katey Sagal's 'Rebel' Pilot Is a Mess, But Possesses the Right Ingredients for a Rock-Solid Drama | 'The Falcon And The Winter Soldier' Recap, 'The Whole World Is Watching' →