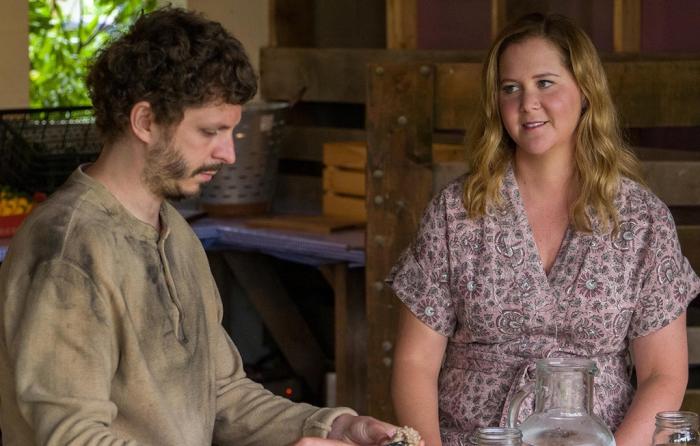 It’s the last day of March, so here are a few brief reviews of March shows about which I either couldn’t think of anything insightful to say or couldn’t find the time to say it.

Life & Beth — The Amy Schumer Hulu series is admittedly much better than I expected it would be. It’s a non-traditional rom-com about Beth, a wine-seller played by Amy Schumer, who acts in unusual and erratic ways after her mother dies. She quits her job, she dumps her dippy long-term boyfriend, she briefly reconnects with her homeless father (Michael Rapaport, who is a maddeningly good actor here, much to my chagrin), and falls in love with a neurodivergent farmer, John, who is clearly based on Schumer’s real-life husband. Remarkably, it’s a bearded Michael Cera — who plays John — that elevates the series, which mixes Schumer’s brand of self-mocking comedy with a few genuinely authentic moments. It’s no Starstruck — honestly, the best TV rom-com to come along in a long while — but it’s occasionally funny, occasionally sweet, and easily the best thing that Schumer has done since Trainwreck.

Mrs. Maisel (Season 4) — The Internet has forgotten about the once-buzzy series with a slew of Emmys (20, to be exact), but as it heads towards its fifth and final season, the show has regained some momentum, even as Rachel Brosnahan’s Midge Maisel spends much of the season trying to figure out a new career path. Alex Borstein, however, continues to be the best part about the series, and her Susie Myerson is moving up, opening her own agency (with the aid of a couple of wonderfully helpful mobbed-up men), finding new clients, and resurrecting the career of Sophie Lennon (Jane Lynch returns, but not long enough this time to wear out her welcome). Tony Shalhoub’s Abe Weissman is the next best thing about the show, and he’s floundering, too, working as a critic for peanuts (some things never change), and he and his wife are forced to move in with Midge into their own old apartment. However, the best best thing about the season besides an outstanding Borstein-centered episode, in which Susie has to come to terms with the death of her roommate, is that the recurring presence of Luke Kirby’s Lenny Bruce finally pays off in a huge way that fans of this series definitely do not want to miss. Hell, even Joel and his burgeoning relationship with Mei is tolerable this season. The audience for the series may have moved on, but in its fourth season, Mrs. Maisel is as good as it’s ever been.

Upload (Season 2) — I have been trying to think of something insightful to say about the second season of the Greg Daniels series for weeks, but the best I can come up with is that it’s decidedly OK! If you’ve forgotten about the first season since it aired two years ago, don’t worry. You’ll probably forget about the second season a week after watching it, too. It’s only 7 half-hour episodes and it goes down easy. Robbie Amell is charming (and very hot), and there are a smattering of laughs to be had (and it’s a hell of a lot better than Daniels’ other series at the moment, Space Force). The series does end on a major cliffhanger and Amazon hasn’t yet picked it up for a third season, so maybe hold off on watching it until that’s official.

Welcome to Flatch — Flatch is an American remake of the UK’s This Country, and it’s about the eccentric citizens of a small-town in Flatch, Ohio. I haven’t watched much Letterkenny before, but I like to think that Welcome to Flatch is like a mockumentary version of that series, only probably not as good. The focus is on Kelly (Holmes) and Shrub (Sam Straley), Schrute-esque cousins who spend most of their time trying to find something to do to kill time in their dead-end town. Sean Michael Scott and Aya Cash also have supporting roles as a minister and reporter who moved to Flatch and then broke up (I’m honestly not sure what they’re doing in this series except to bring it some name recognition). It’s the kind of comedy that I felt certain I would love after the first five minutes, but after three episodes, it hasn’t yet realized the potential I thought it could have. It’s amusing, just not that amusing. (Welcome to Flatch airs weekly on Fox, but all episodes are already available on Hulu).

Mr. Mayor (Season 2) — It’s not the best sitcom on network television (that title easily belongs to Abbott Elementary), but it may be a distant second, although no one seems to be talking about it. Like Tina Fey and Robert Carlock’s 30 Rock, Mr. Mayor has found its footing in the second season, and every single character is a joy, from Ted Danson’s in-over-his-head wealthy Los Angeles mayor to Holly Hunter’s overcooked progressive to Vella Lovell’s shallow progressive to Bobby Moynihan’s hysterical idiot man child. The Fey/Carlock sense of humor is not as trendy as it once was, but that makes it no less funny, and Mayor packs in more jokes per minute than any other show on the air.


← In the Refreshingly Inessential 'Moon Knight,' the MCU Continues Its F--- It Phase | The GOP Is Going to War With Disney (Good Luck With That) →