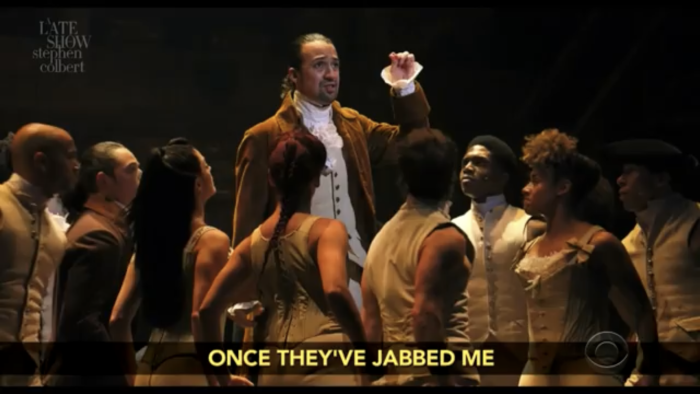 My two day jobs, pre-pandemic, were giving tours at a Broadway theater and bartending at another. I love Broadway. It’s why I moved to NYC when I was 18 and, one way or another, it’s why I have been here ever since. When it shut down last year I was flabbergasted. “Surely this won’t last long,” I thought. I was wrong. It’s been over a year since Broadway shut down but, entering stage left, we have some hope!

New York City has been making a concerted effort to get Broadway employees vaccinated. Whether on stage, backstage, or front of house, workers can go get their vaccine right in the heart of Times Square. Film and television workers are also welcome! Broadway is on its way back and with it comes its most popular show and … I will have to accept that.

I like Hamilton as much as the next theatre kid. Thanks to a friend I was even there opening night. Was I in the literal last row? Yes. Did that stop me from seeing Spike Lee load up on (I think) shrimp at the after-party? No. Hamilton is an energetic, inventive, awe-inspiring show that will get you HYPED. The first time. Then you hear it again and again and again. When you are adjacent to a show like that it gets old QUICK. So do the jokes.

Be it sketch, stand-up, or improv shows, if you’re in NYC you’re going to be subjected to Hamilton jokes. If you’re visiting, that must be nice, must be niiice (nailed it). But if you live here. If you’re going out to support friends at their shows and are forced to listen to Hamilton-inspired comedy it’s… exhausting. They’re never as good as the show itself and I’m overhearing the show to begin with. Yet, seeing as this is a sign of Broadway’s return, I’m going to have to deal with it.

Which brings me to the inspiration for this article.

In a new episode of A Late Show with Stephen Colbert, they kicked things off with a Hamilton parody about getting vaccinated. When I saw the header image I cringed. But, as I watched and really grasped that this meant Broadway is healing, I found myself laughing and smiling. I miss Broadway, y’all, and I’m thrilled to see it return. Even if it brings Hamilton jokes with it.


← John Walker is Exactly the Captain America the Government Wanted Steve Rogers To Be | Review: Aya Cash and William Jackson Harper's 'We Broke Up' Isn't The Rom-Com You're Pining For →