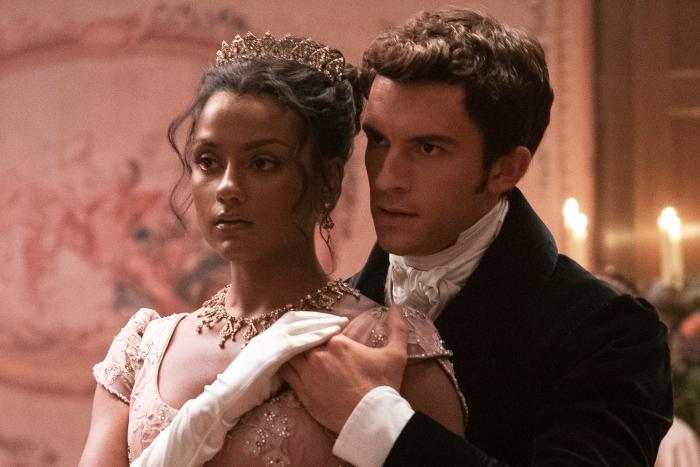 Netflix has finally debuted its trailer for season two of Bridgerton, though its release day is merely two weeks and some change away. Fans of the Bridgerton book series understand that lead characters come and go, but television audiences aren’t quite as accustomed to the disappearance of major characters in between seasons. How will they feel about the absence of Regé-Jean Page, who does not appear in the second season, while last season’s lead, Phoebe Dynevor, has a less substantial role, if the trailer is any indication?

No matter, because Jonathan Bailey’s very handsome Lord Anthony Bridgerton has been elevated to the lead. He will be vying for the affections of Edwina (Charithra Chandran), at least until her older sister, Kate (Simone Ashley), tries to sabotage the love match and perhaps forms a romantic interest of her own in Lord Anthony.
My guess is that by the third episode, no one will even remember that Regé-Jean Page has already moved on to The Gray Man (with Chris Evans) and a Dungeouns and Dragons movie (with Chris Pine) before, potentially, becoming the next James Bond.


Bridgerton season two will premiere on Netflix on March 25th.

← Olivia Rodrigo Steps One Foot Out of the Door of 'High School Musical: The Series' | 'The Walking Dead' Has Completely Ruined Its Series Finale, Unless ... →