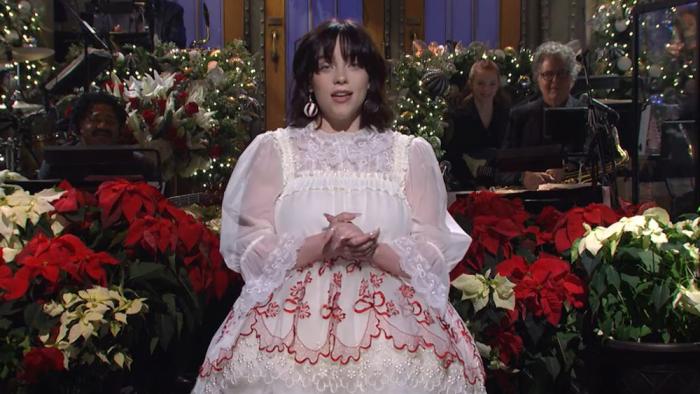 Billie Eilish Crushes It as Host (and Musical Guest) of 'SNL'

Cold Open — Kate McKinnon is back! She must be done with the Tiger King movie. She’s playing Dr. Fauci, here to talk about COVID. Fauci introduces the CDC players, who act out COVID scenarios in airplanes, on Santa’s lap, two unemployed brothers on X-mas day (the disgraced Cuomos), Marjorie Taylor-Green and Lauren Boebert carrying their guns, and Aidy’s Ted Cruz (“If you’re sick of seeing me, imagine how sick I am of being me.”) (Watch Here) (Score: 5.5 out of 10)

Billie Eilish Monologue — I heard that Eilish is the first person born in the 21st century to host SNL. She delivers a solid good monologue (a longer one than usual), mostly talking about the public perception of her, her inability to act, and Colin Jost. (Score: 6.5 out of 10)

Holiday Cards — A couple looks at the holiday cards on their refrigerator, and all the people in the cards have a story. Miley Cyrus makes an amusing cameo. It’s an amusing sketch, but I can’t get over the fact that Beck Bennet would be so much better than Alex Moffat as the douchebag husband. (Score: 6 out of 10)

TikTok — We take a trip through a teenager’s TikTok feed, and it’s fantastic. This should be recurring (Moffat unfortunately is playing Beck Bennett again). My teenage son also says it’s very accurate, especially the Homer Simpson ASMR. (Score: 8.5 out of 10)

Hip Hop Nativity — The title says it all. Nativity scene + hip hop. Baby Jesus twerking. Mary on a stripper pole. It’s worth noting, too, that Billie Elish is being used to absolute perfection tonight. (Score: 6.5 out of 10)

Lonely Christmas — A teenager sweetly asks a lonely old lady across the way for Christmas, only it turns out the lonely old lady is virulently racist and apparently keeps a human as a pet. It’s very sweet, and very disturbing. (Score: 8 out of 10)

Weekend Update — I don’t know if “Weekend Update” is not as good when the rest of the show is great, or if it’s better when the rest of the show is lousy, or if it’s the same every week and it’s graded on a relativity scale, but this week, it’s just OK. The Epstein joke, though, is … something. Punkie Johnson talks about Christmas with her family, and not wanting a straight daughter. Andrew Dismukes, who might replace Kyle Mooney as my least favorite cast member when Kyle Mooney leaves, brings out an octopus named Bongo who predicts NFL winners, only instead the octopus predicts that Dismukes will die. It’s a good skit, except for Dismukes, proving once again that Dismukes is a much better writer than cast member. That said, Andy’s Amazing Animals is an 8, but the rest of “Update” is a (Score: 6 out of 10) (Watch Jost, Che, and Punkie Johnson here, here, and here). Amazing Animals also gets the Mat skit of the week, although the TikTok skit is his daughters’ skit of the week.

The Night I Met Santa — Eilish (with backup singers McKinnon and Nwodim) sing about their very awkward encounters with Santa. It’s another instance where SNL brilliantly uses Billie Eilish, who is turning into one of the better hosts in recent memory. (Score: 6 out of 10)

Kyle Mooney Does a Thing — Mooney fishes for Christmas invites from various cast members with no luck. I wouldn’t invite him, either. F**king Mooney. (Watch Here) (Score: 4.5 out of 10)

Business Garden Suites — Eilish and McKinnon promote their basic-ass hotel, which provides “everything that is legally required.” Kate McKinnon’s return would also not be complete if she didn’t make the host break. It’s the perfect 10-1 skit. (Score: 8.5 out of 10)

I’ll also note for those who sometimes complain that our scores are too harsh, this is our scoring scale:
1: Dogshit
2: Terrible
3: Bad but possibly provokes a laugh.
4: Not good
5: Average
6: Good
7: Great
8: Exceptional
9: A skit so good it only comes around once or twice a season
10: An SNL classic that we only see every 2-3 years.


← How Misogyny in the Trinity Killer Investigation Links 'Dexter' to 'Dexter: New Blood' | The Immortal Anne Rice and Her Vampires Who Changed the World →