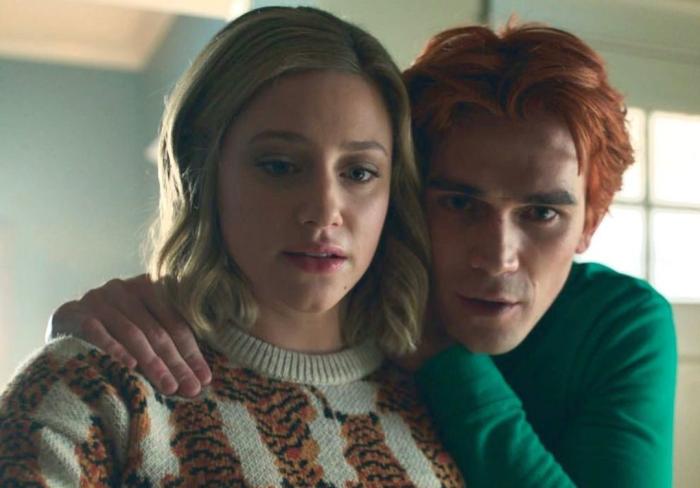 Betty Dismembers a Body, Penelope Is a Serial-Killing Nun, and Jughead Is Destined to Die on 'Riverdale'

Here is your weekly Riverdale recap: There’s an apocalypse coming soon, which we know because Tabitha saw it when she traveled to the future. Ahead of the apocalypse, a dense fog rolls in. There’s a creeper who may be the Trash Bag Killer hanging around outside Archie’s house, so Betty’s like, “Peep that guy. Let’s lock the doors and bone, Archie!” And so they do, and then Betty is like, “I know we haven’t defined the relationship yet — like, are we even dating, Archie? — but listen, I missed my period and I may be pregnant.” Then Betty reveals that when she was held captive and trapped in a well by the Trash Bag Killer, he only let her out because Betty agreed to dismember a body. “And then he said I could go,” because he thought they were kindred spirits. “This act of dismemberment will be our secret binding us together forever,” TBK told her. And then Archie is like, “That’s cool! I always wanted a family,” but then the episode ends on a cliffhanger, as Betty and Archie are staring at the pregnancy test, results unknown.

Elsewhere, Toni talks to Kevin, who is seeking full custody of their baby, but she’s threatening to reveal that Kevin is not only super promiscuous but that he likes to have sex that ends in violence. Oh, Kevin! Saucy! Later, Moose returns (he’s going to be the Riverdale P.E. teacher) and he’s seriously into Kevin. They bone. When the fog lifts, Kevin has an epiphany. He calls Fangs (Fangs and Kevin used to be lovers) and lets him know that he is willing to split custody with Tabitha, but Fangs is like “No way! You’re a friend of Percival, and no friend of Percival should share any custody of my wife’s son with my former lover!”

Cheryl’s mom Penelope Blossom is back. After Cheryl banished Penelope from Thornhill, she traveled to the Himalayas and became a nun at the Sisters of Quiet Mercy. “You’re telling me they let an ex-dominatrix, convicted felon and serial killer join their convent?” Cheryl asks. Penelope tells Cheryl that she has a weekend to finish her “unfinished business” before her final vows. Cheryl’s mom makes to steal the evil doll with Abigail’s soul trapped inside, but Cheryl catches her. She is about to torch her with her pyrokinetic powers, but Mumsie Penelope is like, “I have letters from your best friend Heather from high school” to prove that she is a changed woman, and then Cheryl spends the rest of the episode reading those letters and crying because she’s just as gullible as Susan Collins when a Supreme Court nominee says they won’t overturn Roe.

Reggie is packing up and about to leave the casino because he and Veronica have split up. But Veronica wants to play strip poker first. One thing leads to another, and they have sex and maybe decide to stay together for about 10 minutes. Then they break up because Veronica won’t remove the painting of Hiram in her office. They’re too much like their own parents, they agree, so they have to “break the toxic cycle.” Ten bucks says that Veronica got pregnant during the strip-poker sex, and she probably lives in one of the 26 states that will soon ban abortion, so I guess she and Reggie are going to be parents now.

Jughead asks Tabitha to use her time travel powers to stop the bomb that leads to his deafness. Tabitha lies and says she can’t stop the explosion because it’s a fixed point in history. Then she comes clean and says that it’s really because she’s seen 1084 different versions of the future, and the only versions of the future in which they defeat Percival is when Jughead has his mind-reading powers. Tabitha also tells Jughead that in all 1084 versions of the future, Jughead dies. “Your death is fixed,” she tells Jughead, and Jughead is like, “Don’t say that! You’ll take away my hope,” and then they make out.

Finally, after the fog rolls through, we find out that the city council met under the cover of the fog, dissolved itself, and appointed Percival Perkins as mayor.


← A Leaked USCS Draft Spells Out the Death of Roe v. Wade | The 'Grey's Anatomy' Writer Lied About More than Cancer, She Also Lied about Anna Paquin →