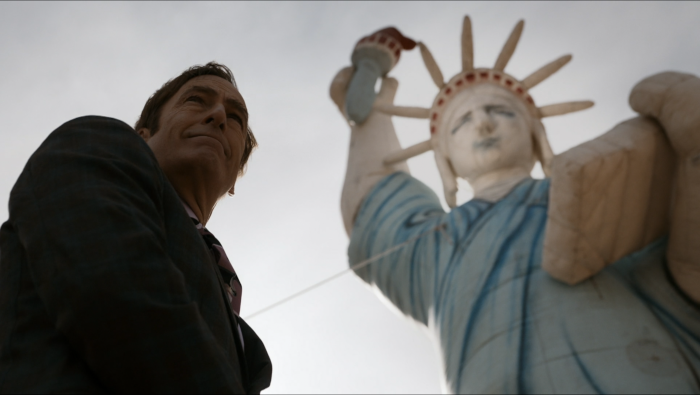 After more than two years on hiatus, lengthened due to COVID-19 and Bob Odenkirk’s alarming health scare, Better Call Saul is back, baby, with its sixth and final season. I’m sure I’m not alone when I say that if you had told me back in the beginning of 2015 that the seemingly unnecessary spin-off based around the comic relief in Breaking Bad would be a stunning yet remarkably tragic character study—and, arguably, surpass the hit series that preceded it—I would never have believed it. But here we are, five seasons down with the sixth bringing it to the proverbial home base, preparing to converge with the Breaking Bad timeline, proving once again that, in many ways, the end is always the beginning.

The episode opens, not with a look in on Gene Takovic (presumably we’ll be closing the season with him), but with the immediate aftermath of the events in Breaking Bad, i.e., the confiscation of Saul Goodman’s assets. As the old saying goes, money can’t buy taste—the Dolly Parton bon mot, “It costs a lot to look this cheap” also springs to mind—as we can see with Saul’s home (golden toilet and all). Last season saw the emergence of Saul Goodman into the world, a corrupt butterfly crawling out of a chrysalis of cynicism and pain, marching onwards towards a life of not simply being a lawyer, but fully aiding and abetting criminals, including the Salamanca cartel which quickly sunk its hooks into him (for those who need an overview of last season, there’s an official primer here). Over the course of the two episode premiere, we watched as the consequences of last season began to unfurl.

Though the main focus of the series has always been the evolution of Jimmy McGill into Saul Goodman, one of the greatest unforeseen consequences has been the change we’ve seen in Kim Wexler (the exquisite Rhea Seehorn). Once a straight-laced lawyer, she’s now a mastermind who’s embraced a ruthlessness that would have been difficult to imagine back when we first met her in season one. Of course, that’s not how she would interpret her position, but her willingness to adopt Jimmy’s ‘the end justifies the means’ tactics has left her previously firm ethics in tatters. Or, to put it in another way, when Jimmy McGill begins questioning the morality of an action, you’re probably in too deep. Luckily for her, Saul Goodman is amiable (if not eager) to permanently dent the reputation of Jimmy’s occasional adversary and Kim’s former boss, Howard Hamlin (Patrick Fabian), in order to speed up the Sandpiper settlement, allowing her to start the pro bono practice she’s been dreaming of, i.e., her rationale for her unethical behavior, and secure her and Jimmy’s life together. There may not be a lot of love for Howard out there—I find him fascinating and, in some ways, a tragic figure in his own right—but an extensive campaign to convince each member of New Mexico’s legal profession that he’s suffering from an uncontrollable cocaine addiction is reaching new unsavory lows.

The main thing to remember, though, is the fact that Kim has been abundantly clear that she has been an active participant in all of this. For most of the male figures in her life, from Chuck, Howard, even Jimmy at times, it’s been presumed that she’s some sort of “fallen woman” who’s been led beyond the straight and narrow, committing fraudulent acts solely for the man she loves. However, the truth is that while Jimmy may have shown her that particular life path, Kim was more than happy to make her way down the trail. As she’s proven on numerous occasions, she’s more than capable of using any tools within reach; coupled with a lingering righteousness, she’s damn near unstoppable. When Jimmy and Kim locate our old friends from season one, shameless suburban criminals Betsy and Craig Kettleman (Julie Ann Emery and Jeremy Shamos, respectively), to move the plan against Howard forward, we see exactly how cold-blooded she can be: when Betsy’s fury at Jimmy (“Because of you, we lost everything. Our kids are in public school!”) results in her not only rejecting his “carrot” (the hush money to keep them from divulging the plan to Howard), Kim is more than willing to wield the stick (“Okay, enough carrot”) by threatening to sic an IRS criminal investigator on them. It’s effective, though it leaves Jimmy rattled. He may be the feckless Saul Goodman now, but for Jimmy, at least the best of him that hasn’t been purged just yet, can’t help but pity the Kettlemans. As he grows increasingly concerned over the state of Kim’s soul, it wouldn’t be a surprise if he steadily grows to fear her as well. What he may need to concern himself with first, however, is the question of who was in the car that quietly followed them off of the Kettlemans’ lot.

Better Call Saul is still good for the occasional laugh—Saul leveraging his faux-Jewish identity at the country club is offensively outlandish behavior, but “it’s wall-to-wall mayonnaise!” got a chortle out of me—but the anxiety-inducing countdown has officially begun when it comes to finding out the fates of those who have no place in the world of Breaking Bad. For Nacho (Michael Mando), an exceptionally bright young man whose compulsion to cut corners, much like Jimmy once upon a time, took him in an increasingly terrible direction, it’s nearly impossible to imagine him making it out alive. His death, should it happen, will be difficult to watch and will almost certainly wind up being a nailbiter. But as far as what happens to Kim? Entirely unclear, though I’m confident that whatever it is will wind up being utterly devastating. At best we can hope that she restarts life elsewhere, leaving Jimmy with nothing more than that Zafiro Añejo bottle top, the symbol that marked the beginning of their singular partnership, which tumbles out of Saul’s desk drawer and onto the street in the premiere’s cold open. Another happy memory gone sacrificed to make a hasty retreat for survival, but whether or not Jimmy, now Gene, goes on to truly live is an answer we’ll have to wait eleven more episodes to discover.

Kaleena Rivera is the TV Editor for Pajiba. When she isn’t feeling deeply anxious to the point of stomach pain over Kim Wexler’s fate, she can be found on Twitter here.


← 'Outer Range,' 'Spy X Family,' 'Moon Knight,' And More On Podjiba! | Jerry West Is Livid About His Depiction in 'Winning Time,' Which Tracks with the Way He's Depicted in 'Winning Time' →