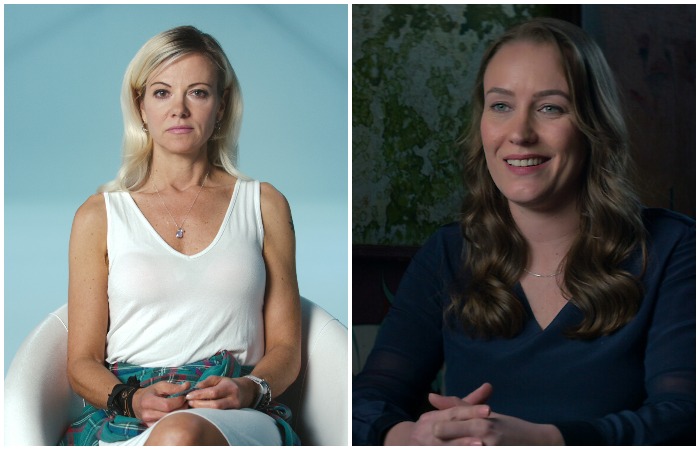 Are the Straights OK? Making a Spectacle of Gaslit Women for the Sake of Denouncing Asshole Men

I watched Bad Vegan after rolling through Twitter on the day of its release. The initial tide of posts I encountered, by and large, expressed a level of contempt for Sarma, the businesswoman and victim at the center of the narrative. Bad Vegan (spoilers) follows Sarma’s apparent indoctrination in a cult-of-one by her uber-manipulative husband, Anthony Strangis: she’s drawn into a private, unspoken fantasy world of impossible, supernatural promises. Sarma was an early high-end vegan restauranteur, before it was cool, with a massively successful flagship restaurant in New York City. Over the course of years, Anthony bled her and her business’s finances to nothing by demanding more and more money from Sarma (and, weirdly, her mother), and because Sarma herself transferred the funds to him, she was tried for the felony theft from her own restaurant and went to prison for it, long after Anthony had already been released for time served.

Listed out in plain English — that some vast, powerful network could elevate Sarma’s human existence to another plane, or that her beloved dog could be made immortal — the promises are satisfyingly ridiculous in hindsight, easy fodder for internet humor. As a complete picture, the fantasy world of shadowy, unspeakable secrets and invisible, all-powerful organizations seems as absurd as any children’s game. That seems to be the root of so much of the online contempt for Sarma: that she was too sharp, too with it, to not see the absurdity of the story she was buying into.

Bad Vegan arrived on Netflix in the wake of the viral documentary The Tinder Swindler, the story of a dating app con artist who poses as a fictive ultra-rich diamond heir, Simon Leviev, who after extensive, vast displays of wealth—private jets, massive parties, high-rolling dinners—feigns an emergency and squeezes his girlfriend/friend/victim for cash via credit cards and loans, with apparently reasonable but entirely hollow promises to pay it back.

Bad Vegan and The Tinder Swindler share much of the same DNA. Well-spoken, white, blonde women are financially ruined by the emotional commitment to destructive, dishonest, and infuriatingly self-righteous men. And at the conclusion of each, said men are roaming freely, with their voices haunting the closing moments of the story. In each case, these men inhabit their own reality, in which their innocence prevails, despite arrests, jail time, and—now—global notoriety.

Simon and Anthony are both young-ish men with bottomless appetites for wealth. Anthony siphoned millions through his years-long scam on Sarma and her family; Simon blew tens of thousands of dollars every few days and then grabbed for more. (In Simon’s case, it would, unfortunately, be as accurate to use the present tense as the past.) Their greed is stunning and unending, an addiction to money that drowns the people who trust them.
As Vanity Fair reporter Allen Salkin says of Anthony, “I wish I could slap a warning label on this guy.” Effectively, that’s what the documentaries achieve: Simon and Anthony are exposed in dramatic and devastating fashion, in top-trending Netflix documentaries.

But neither man sits in front of the camera in the interview chair: in their place, representing their damage, are the women whose lives have been torn to pieces via their belief in a compelling story. These women are the showpieces of the narrative, the voices who detail their own financial and emotional manipulation. They are frank and clear about their mistakes, doing their best to narrativize the process of gaslighting from their perspective. I find myself trying to analyze Sarma’s highly controlled and direct body language, poised precisely in her chair, framed like a target at center-screen. Throughout The Tinder Swindler, I watch Cecilie’s face glow with good feelings, with genuine excitement and goodwill, even in the aftermath of disaster. Another victim, Pernilla, is composed, sunny, poised, and utterly rational as she recounts a friendship she clearly treasured at the time and which ultimately buried her in devastating debt.

But the very fact that the women are the living, breathing focal points for real-time analysis opens unsavory doors. I too fell into picking apart their expressions and body language, as if they were the ones whose deepest motives must be investigated. It’s the same vein of doubt and inquisition that invites online comments accusing them of gullibility, of stupidity, of being in on it. It’s an implicit and pernicious gateway to victim-blaming: to make the victims the showcase of the crime, to portray the crime through their admissions.

The astonishing and terrifying heart of gaslighting is trying to understand how a falsifiable story became a person’s whole reality. Especially in Sarma’s case, empathy didn’t seem to stretch far on the viewers’ end. After all, my first exposure to her story was reading how she must be either very stupid or very guilty. Twitter decided what version of reality was real, and hundreds of likes and retweets subscribed to that story click by click.

What’s the most real, most believable story? In the aftermath, in the absence of force or fear or the sense that your whole self could be lost with one too-pointed question, it’s hardly a fair ask. But that’s the purpose of these documentaries: Whose story gets to be real?

My personal sense is that most people get conned in some sense in their life, but most will never know about it. I’m sure I’ve Venmoed ten bucks I didn’t actually owe or promoted a less-than-pristine charity online at some point. Odds are, I’ll never find out about it and an investigative reporter will never show up to document my mistake for a global streaming platform. Bad Vegan and Tinder Swindler are extreme cases—life-ruining catastrophes, rather than white lies and small favors. Would you really withhold an act of kindness and support for a friend in their moment of need?

On one hand, it’s refreshing to silence the destructive men of these narratives in favor of their victims’ voices. After all, I don’t really want to hear what further lies Simon has to spin or whatever freshly re-tailored truth Anthony has managed to dream up, do you? But I also can’t help feeling the weight put on the women to bear the weight of these men’s absurdity and manipulation all over again in re-telling it. But then, how should these stories be told?

In the introduction to his true crime collection, The Case of the Vanishing Blonde, veteran crime writer Mark Bowden writes, “Good crime stories sell. All the bad things said about them are true—they exploit tragedy, they are voyeuristic, they generally lack any broader social import—but they are unfailingly fascinating.” He recalls his days in newspaper reporting when a good “dirtball” story could “sweep aside the most important news of the week” to claim room on page one.

It’s true, we still love “dirtball” stories. There have been plenty of dirtballs, but now they’re not printed at the top of the front page, but on streaming sites that gobble hours and hours with patient interview footage and edge-of-your-seat editing.

Dirtball stories are nothing new, and they’re not going away. Their current form as documentaries and docuseries does beg the question, though, how the burden of telling them falls and how that can undercut the purpose of telling the story at all. Does Bad Vegan slap a warning label on Anthony Strangis? Or does it fetishize Sarma and her failings as we watch them inevitably unfold? Just three days ago, Sarma called out Netflix and Bad Vegan for being “disturbingly misleading.” Even though her voice is foregrounded, her story isn’t hers. Even the title positions her as a love-to-hate figure: Anthony isn’t really a vegan, after all. She’s the bad vegan in the end.

Maybe one day someone might figure out how to tell stories of abuse and gaslighting without this destructive burden on the victims. Maybe. Until then, we’ve got dirtballs a-plenty, and millions waiting to chow down.


← Why Isn't There an Oscar for Best Stunt Work? | 5 Shows After Dark: 'Halo' Series Premiere on Paramount+, 'Atlanta' Season 3 Premiere on FX →