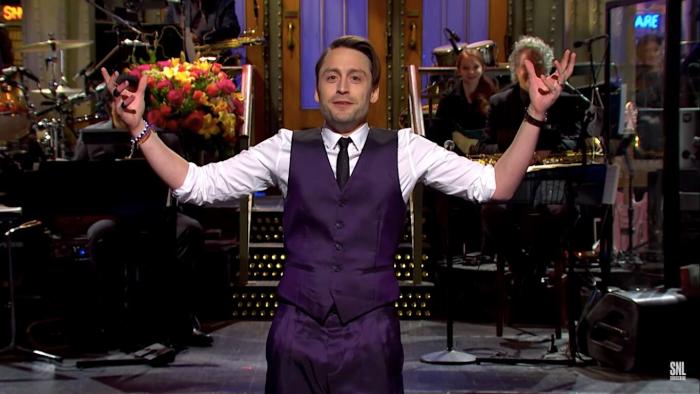 As Host of 'SNL,' Kieran Culkin Is Exactly As Good As You Expected He'd Be

Cold Open — Cecily Strong’s Jeanine Pirro is back, and she’s interviewing Aaron Rodgers (Pete Davidson). She also interviews Glenn Youngkin (Alex Moffat) about CRT, which he doesn’t know anything about, except that it got him elected. James Austin Johnson — who really does have a spectacular Trump impression — shows up to offer his unelicited support to Youngkin. I don’t care how good the impression is, though, I’d really rather never see Trump — impersonator or otherwise — on my television screen again. Makes me nauseous. (Watch Here) (Score: 5 out of 10)

Kieran Culkin — Culkin shows an old clip of him on the show when Macauley hosted, and it’s hilarious. It’s a short but charming monologue. He’s great (and if you watch it, note that during the sign-off, they picked up Kieran). (Score: 7.5 out of 10)

Spectrum Cable Customer Support — Culkin plays a guy trying to cancel his cable, and he’s given the run-around, and as absurd as it is, it feels very real. Too real. This skit is raising my blood pressure. (Score: 6 out of 10)

Men’s Room — We hear the interior monologue of co-workers (Bowen Yang, Chris Redd, Alex Moffat, Andrew Dismukes, and Kieran Culkin) standing next to each other at the urinals trying to engage in awkward small talk. Tracy Morgan makes a perfect cameo appearance, too, as the guy hanging out in the stall. (Score: 7.5 out of 10)

Kentucky Derby — Kieran Culkin plays a guy who rides a horse like a skateboard and sings a ’90s pop-punk song about it. It feels like a Kyle Mooney skit, and it’s stupid as hell, but also kind of great. It’s also the Mat skit of the week. Sorry, Mat! (Score: 6.5 out of 10)

Weekend Update — Che and Jost are low-energy tonight, and the jokes are not great. Even the groaners are lazy. Kenan appears as Ice Cube to talk about losing a movie over a vaccine mandate, but mostly to talk about all the other movies he can’t make because of it (Mamma Mia Cube?). Cecily Strong plays a character named “Goober the Clown” who had an abortion when she was 23. There are so many good skits otherwise tonight that this may be a first: I’m not going to embed the “Update” vids (Watch here, here, and here), but I’m going to embed Goober the Clown because it’s fantastic. (Score: 4 out of 10, except for Goober, which is an 8 out of 10)

Wake Up Rhode Island — The weatherman is so preoccupied with his Turkey costume and rap that he missed a major, life-threatening Nor’easter, and then it gets hilariously awkward with all the turkey graphics. (Score: 6.5 out of 10)

Please Don’t Destroy — I’m not so sure about these guys. The whole skit is about trying to repair a relationship after a break-up but the guys can’t stop themselves from cursing the ex out on the phone. Eh. (Watch Here) (Score: 4.5 out of 10)