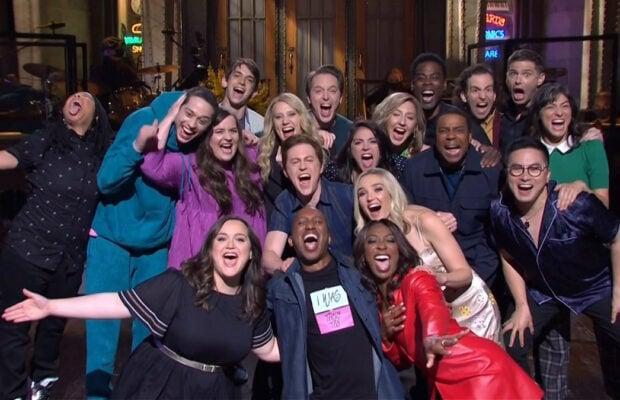 Cold Open — A very sweet look back at the difficult, challenging, emotional, and bananas year of SNL, including an appearance from Chris Rock, who hosted the season opener. A really solid way to open the year’s final episode. (Score: 9 out of 10)

Anya Taylor-Joy Monologue — A decent monologue from the star of Queen’s Gambit, if you’ve seen Queen’s Gambit (most of the jokes are related to the series). It was also fun to see Kenan as a chess piece … ? (Watch Here) (Score: 5 out of 10)

Hollywood Squares — A 1998 episode of Hollywood Squares allows much of the cast to do impressions. The joke, however, is that the Game Show Network has to edit out most of the episode — Bill Cosby, Matt Lauer, Kevin Spacey, Jeff Dunham, and Jared Fogle sitting next to the Olsen Twins, so basically, the entire broadcast except for Sporty Spice, when she wasn’t talking about how much she admired the rest of the panel. (Score: 7 out of 10)

Picture with Dad — Bennett plays a lame Dad who thinks it will be funny to take a prom picture with his daughter and boyfriend while holding a gun, and then accidentally blows his dick off. This is the Mat sketch of the week, NOT because Mat would ever take a picture with his daughter while holding a gun, but because he’ll definitely think it’s funny that this guy blew his dick off. (Score: 6 out of 10)

Making Man — In this sketch, God’s design team for Human Man get together to discuss their choices, while the design team for Human Female calls into question those choices. The Human Man team basically disagrees with the Human Woman team out of spite, and that’s why we have wrinkly ball sacks now! (Watch Here) (Score: 4 out of 10)

Pride Month Song — The gist is basically: “There’s a lot of problems with Pride Month — it’s expensive, exploitative, a pain in the ass — but we missed the hell out of it last year.” Lil Nas X makes an appearance, and while the song is terrible — a bad parody of Madonna’s “Holiday” — the sentiment is right on. (Score: 6.5 out of 10)

Celtic Woman — A Riverdance-type stage production about Irish culture with Gaelic songs in Ohio. It was weird, but it looks like the cast had fun doing it (that is my nice way of saying it’s a bad sketch and you should not watch it). (Watch Here) (Score: 4 out of 10)

Weekend Update — Solid jokes, and some no so solid jokes, and it’s Jost this week that delivers the groaner. Pete Davidson comes on to talk about Mental Health Awareness Month, and he’s moderately funny and sweet. Cecily Strong’s Judge Jeanine Pirro has a final drunken appearance this season to splash her wine all over Jost and perform a drunken version of “My Way” that ends with her in a tank of White Girl Wasted boxed wine. It’s outstanding. If it’s Cecily’s last show, it was a hell of a send-off. And, of course, as is customary for the last episode of the season, Chest do their joke swap. As always, Jost seems to get the worst of it whether he’s reading Che’s jokes, or writing jokes for Che. (Score: 8 out of 10)

Lingerie Store — It’s a lingerie shop for “brawrs.” It’s pretty remarkable how much mileage they get out of this. It’s a much better sketch than I was expecting, with lots of hilariously specific jokes about boobs/bras. (Score: 6 out of 10)

College Panel — During a Q&A of cast members on a particular show starring young people, the straight white guy gets only easy, silly questions, while the women, gay cast members, and Black cast members get devastating cultural questions. It’s painfully accurate, but one joke and not particularly funny. (Watch Here) (Score: 4.5 out 10)

AMC Commercial — Beck Bennett plays Vin Diesel here, doing a promo for returning to the movies and hitting upon all the details of the experience — every single detail, both good and bad. And I mean: Every specific detail. It’s weirdly better than any real ad a movie theater could make. (Score: 7.5 out of 10)