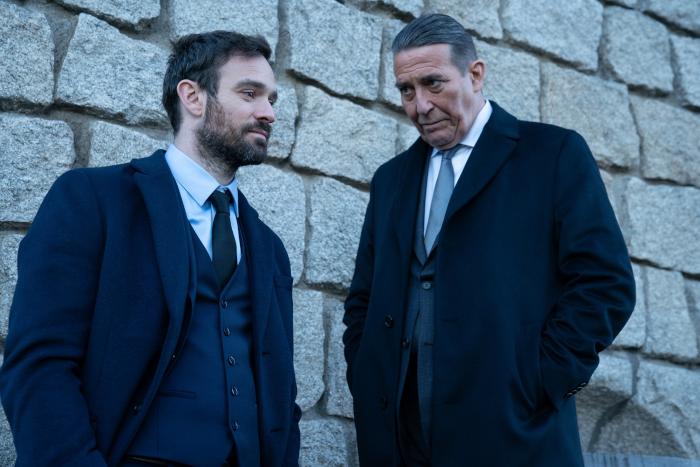 AMC+'s 'Kin' Is a Riveting Irish Crime Drama About Grief

There’s a familiar setup to the drama, Kin, about a Dublin crime family, the Kinsellas, who get caught in a war they can’t win with a bigger drug operation. When Michael Kinsella (Daredevil’s Charlie Cox) comes home after a bit in prison, he’s not particularly interested in rejoining the family business, because he has hopes of one day gaining a custody relationship with his daughter. However, when a hot-headed member of the family, Eric (Sam Keeley), feels disrespected by Eamon Cunningham (Ciarán Hinds) — who supplies the Kinsellas their drugs and sets the terms of their arrangement — he attempts to send a message over the objections of his father and the family patriarch, Frank (Aiden Gillen, aka Little Finger). That message is heard, and the retaliation that follows results in the death of an innocent family member.

What follows is what one might expect to see in an Irish mafia drama: More retaliation. The difference between Kin and most other movies and television shows of this ilk, however, is that the retaliation is not driven by business. It’s not about coming out on top or reclaiming turf. It’s entirely motivated by grief, which makes Kin a more subdued and somber affair than is typical of this genre.

In fact, Charlie Cox — the nominal lead — barely speaks in his role. He’s all introspection, and he re-engages in the family business not out of a sense of revenge, but out of obligation. Michael’s brother, Jimmy (Emmet J. Scanlan), is the driving force behind the retaliation, and even his wife (Clare Dunne) sees it as a moral imperative. It is not pride or ego. It’s about gaining some closure, no matter the cost.

Frank tries to put the brakes on the escalating war, but he’s no match for grief. The family understands they are outmatched. But they can’t stop themselves. The reckless act of one of their own sets off a chain of events that seem to move by force of inertia. The family must protect their own, even if it costs them everything. Hinds’ crime boss Eamon, on the other hand, approaches the situation with infuriating aloofness. He’s the kind of guy who would kill your best friend and then show up to his funeral with flowers. To him, it’s not personal. To the Kinsellas, that’s all it is.

Created and written by Peter McKenna and Ciarán Donnelly, Kin is not a slick, expensive production — it won’t be confused for a Scorsese flick — but it features a number of powerful performances (Maria Doyle Kennedy from Orphan Black is also here as the matriarch) that make it much better than the sum of its parts. It’s an engrossing watch, though hardly a pleasant one, but it’s hard not to sympathize with the plight of the Kinsellas. You can see clearly where it’s headed, and while you know it’s a terrible path, you understand exactly why they’re taking it anyway because you might do the exact same thing. (It’s also nice to hear a lot of these actors speak in their natural Irish accents.)

The six-episode series, which began on September 8th, airs Wednesdays on AMC+.