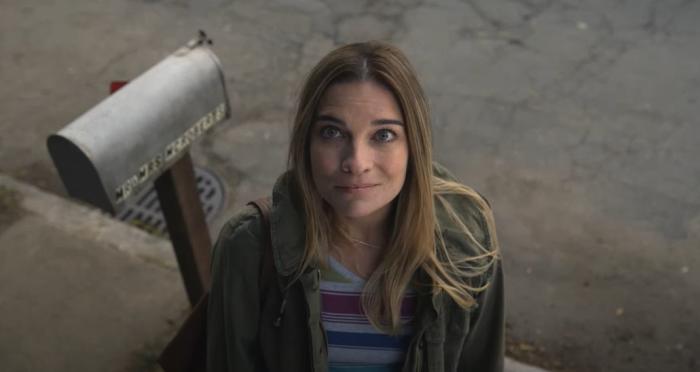 AMC’s ‘Kevin Can F**k Himself’ Review: A Light-Hearted Satire, This is Not

There’s plenty of conflicting opinions when it comes to the television pop culture landscape, but the one that the vast majority of us weary travelers can agree on is that the sitcom trope of the boorish husband with the put-upon, though still hot, wife needs to die a fiery death. As time has gone by and conversations surrounding gender roles and domestic labor have gained traction, the trope is less common these days. However, the memory of all those useless husbands who show more affection towards their favorite football team than their spouse—a.k.a. ‘The Old Ball and Chain’ since marriage is such a horrifically, boner-killing ordeal for him, now please excuse my eyes as they roll for all eternity—is still fresh for many of us. Unlike other tropes, it incites anger not because of how unlikely it is, but because it has a measure of basis in reality. We all probably have at least one acquaintance in which the husband can’t be bothered to pick up a load of laundry while the wife not only works at her own job but also has to maintain an entire household (a full-time job in and of itself, especially once kids are involved) with nary a thanks for her trouble. It’s an unfortunate thing to see, even from afar, which is a big reason why so many of us are left wondering what the f—k is supposed to be funny about watching a woman have to pick up after a man-child once a week on network television. For anyone who has ever wondered about the interior lives of the women shackled to these dipshits, AMC’s new series Kevin Can F*** Himself may possibly be the sitcom critique you’ve been waiting for.

The show opens in the classic sitcom styling, complete with the familiar abundant set lighting and multi-camera setup, as a daytime game of beer pong is underway. This is just a regular day for Allison McRoberts (Annie Murphy), the aforementioned put-upon, hot housewife in this scenario (though the show tries to pretend Murphy isn’t ridiculously pretty). Her husband, Kevin (Eric Petersen), is the concentrated version of every boorish husband archetype that’s existed throughout television history. He mocks her at every turn (under the guise of a joke, of course), makes ludicrous requests, and shows more reverence for Bill Belichick than his own wife. Why yes, this show is set in Massachusetts, what gave it away? Anyway, when Allison isn’t making half-hearted attempts at being amiable to her home being used for the set of a low-budget Animal House remake, she flits off into the background, like so many of her sitcom wife predecessors. Once Allison is alone, however, the sitcom dressing falls away completely. It’s just her, breathing raggedly whilst trying to ignore the low-grade fury burrowing outward. But as she spends more time outside of the house she’s learning to despise, along with the literal stage she’s unknowingly performed on for so long, she begins to realize that it’s time to find a way out of her situation, one way or another.

What jumps out first is the show’s got style going for it. The transition between the sitcom world to the reality that exposes Allison’s depression and isolation is just jarring enough to leave an impression. Between the considerably toned down lighting—watching the exterior shots of Allison walking through the muted, naturalistic lighting of Worcester, it’s understandable if one is vaguely reminded of Mare of Easttown—and lingering shots of Murphy’s stricken face, it lends a delicious sense of foreboding. Unfortunately, I became accustomed to the effect fairly quickly; by the end of the second episode, it began to blend in as just another show affectation, much like the canned laughter produced whenever Kevin or one of his goons makes a bad joke.

For Murphy, it’s probably not far off to presume that the role of Allison is a welcomed one. You can feel her barely-concealed mirth as she rubs her powdered donut-covered fingers on Kevin’s sacred sports memorabilia hooded sweatshirt (a minor subplot I loved) or snorting a bit of recreational cocaine with a cat-calling mechanic named Marcus (Justin Grace). For any Schitt’s Creek fans who coming in to this wondering if there’s “a little bit Alexis” here, the answer is no, not in the least. While Murphy was phenomenal in Schitt’s Creek, the considerably darker themes in Kevin Can F*** Himself allows her to flex her other substantial acting muscles.

As for the role of Kevin, I have to give it up for Petersen. He’s playing a character so loathsome with such confident energy that it makes me want to hit him with a Mack truck. The fact that I am actively rooting for the death of a character who, thus far, has really done nothing more than be deeply annoying and irresponsible with money says a lot about a performance. He has the bug-eyed intensity of Rodney Dangerfield and he’s so perfectly cast that I struggle to imagine him in a more serious role (though I would welcome the opportunity to see it).

Despite the marketing campaign that depicted the series as a comedy, it’s actually more depressing than anything else. Although the fantasies of seeking retribution on Kevin are funny at times, it only serves to illustrate how few resources Allison has. She has little in the way of education and no family or friends to speak of. The closest thing she has to some sort of companionship is D (Jamie Denbo), her uncle’s wife who also works in the same liquor store as Allison, and neighbor Patty (Mary Hollis Inboden, who I wouldn’t be surprised if her name was floated around come Emmy season). Their concern for Allison never registers as friendship; rather, it’s an unattached sense of pity that drives them to give her their meager advice, like dusty coins ruefully dropped into a charity bucket. Their priorities ultimately align with garnering the praise and approval of men, and although this seems intended to be a slice of life commentary on Allison’s severely limited social circle, it just underscores how dismal it is to be a woman in this fictional reality.

Lingering curiosity over whether Allison will eventually find her way out of this sad predicament might be enough to keep viewers hooked, but the series’ dour nature almost guarantees that Kevin Can F*** Himself won’t have audiences flocking. Although the series is essentially satirizing those terrible sitcoms, it doesn’t lean into it as hard as one may think, as it’s clear fairly early on that the show’s focus is on witnessing the slow liberation of a woman stuck in a lifetime of unfortunate choices. Lucky for the cast and crew, AMC is one of the more forgiving networks when it comes to allowing shows a bit of a grace period [knocks on wood]. Still, the slow burn will turn off many, and unless the writers have some tricks up their sleeves, it’s hard to imagine there being enough storyline to carry this beyond one or two seasons. As we’ve seen time and again, a neat premise is rarely enough to hang a series’ success on. With that said, I hope this moody little drama finds its audience, if for nothing else than to see what happens once the audience laughter quiets and the set finally goes dark, with nothing but a new reality to light the way.

Kevin Can F*** Himself airs on Sunday nights on AMC, with the first three episodes available to stream on AMC+.

Kaleena Rivera is the tv editor of Pajiba. When she isn’t wondering what the most expensive piece of sports memorabilia is (answer: apparently it’s a Babe Ruth Yankees jersey that sold in 2012 for nearly 4.5 million), she can be found on Twitter here.