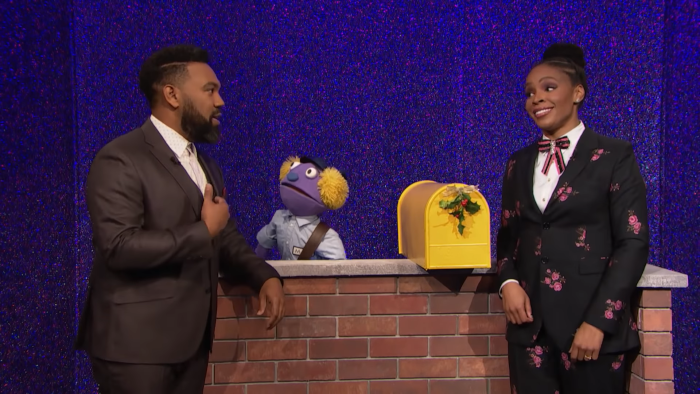 Amber Ruffin Thinks Mailmen Shouldn't Have To Work On Christmas

The best way to be ignored in New York City is to wear a uniform and carry something heavy. Suddenly, you’ll find that not only do people not notice you, but they’ll also keep finding new ways to block your path. I’ve experienced this many times, traversing across Times Square in my snazzy theater-bartending uniform, carrying a keg. But that’s just a few shifts a week. Imagine how Mailpeople must feel. Not only are they ignored, but they also work much more often.

On the newest episode of The Amber Ruffin Show, Amber and her co-host Tarik were feeling excited about Christmas. As is often the case on the show, they decided to sing about it, but this time with the help of a little puppet mailman. Things start fun, funny, and light. Then they go downhill when Tarik and Amber learn just how hard it is to be a mailman! As the sketch plays out, the puppet reveals that being a mailman is not all it’s cracked up to be. Especially around Christmas time.

This is a classic Amber Ruffin Show bit. It’s funny but packs a punch. It’s silly as can be, but that allows the serious moments to land that much harder. Amber and Tarik play off of each other with expert timing. It also shines a light on something (or in this case, some people) that is often ignored or taken for granted. It all melds together for a fantastic example of what makes the show great.