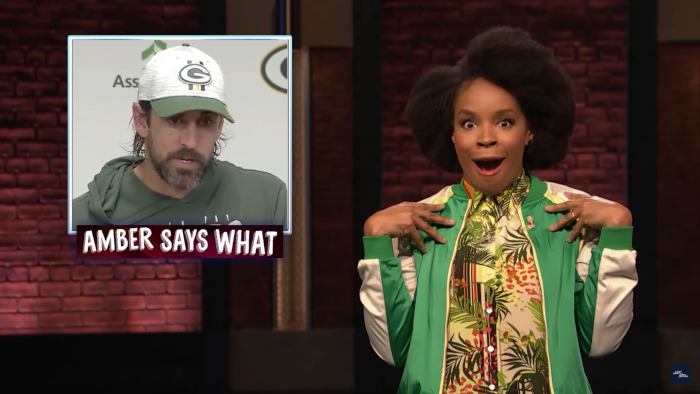 The news comes at you fast. If you don’t stop and think about it all, you may not grasp how truly absurd everything is. Something batshit bananas will happen only to be outdone by the next batshit bananas thing that happens. Then, stories begin to lose their impact. You can see a group of people waiting for a dead man to return to the place his father was killed and think, “Totally normal.” Luckily, Amber Ruffin is here to put things in perspective.

In a new edition of her recurring segment, “Amber Says What,” the comedian and host decided to run down all the news that’s fit to say in six minutes. She covers everything from Jay-Z joining Instagram to the totally normal people waiting for the resurrection of JFK Jr. She brings the same hilarious energy that she brings to all of her work. I could watch Amber take shots at Aaron Rodgers and Jeff Bezos for hours.

She also gives a lot of these stories some proper weight. As I said, the news cycle moves quickly. Within a week I’ll likely forget about the huddled masses that gathered outside Dealey Plaza, singing for John Junior’s return. However, such nonsense should not be forgotten because it is wild, dangerous lunacy! Amber addresses it as such.

There are easier ways to remember newsworthy events. Some ways are more effective as well. But for now, I’ll get my news in hilarious recaps by one of my favorite late-night talk show hosts.