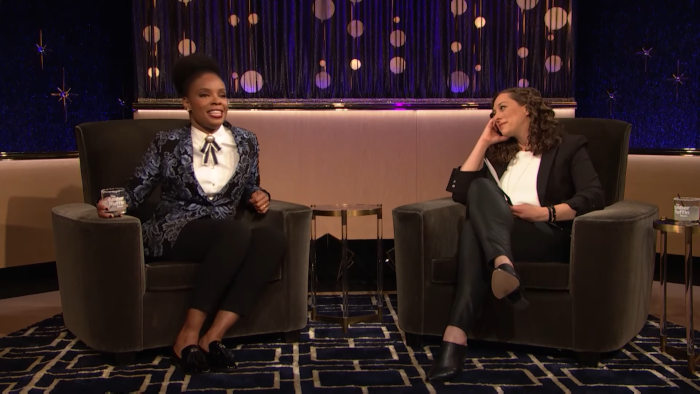 The Amber Ruffin Show continues to flourish. Amber and fellow writer and friend Jenny Hagel have created a show that has deservedly garnered recognition and appreciation. It’s not just that they are a new voice in late night, it’s that they produce a show that is consistently funny, insightful, and heartfelt. No gimmicks or ploys, just 100 percent pure, uncut Ruffin! After all their success, the two hilarious folks decided to sit back and talk about their favorite moments so far.

When asked what she is most proud of so far, Amber both did and didn’t surprise me. She did surprise me because I honestly thought she would choose a song. The musical numbers on The Amber Ruffin Show are unmatched. She didn’t surprise me because her choice humbly turned the attention towards members of her writing staff. She chose the How Did We Get Here segments. Amber does an insightful deep dive into a socially relevant topic in these segments. They are written by Michael Harriot, Erica Buddington, or Zachary Stevens and punched up by Jill Twist. Here’s one now!

Ruffin and Hagel both recently signed overall deals with Universal TV. That, coupled with them reflecting here makes me a little bit nervous that the Amber Ruffin Show could come to an end. I know! I’m probably (hopefully) overreacting. But I wouldn’t be surprised if Amber and Jenny get too busy to keep doing the show. They love it, but so has every host who has eventually moved on to greener pastures. There’s plenty of Amber Ruffin Show goodness to keep us sated until then.