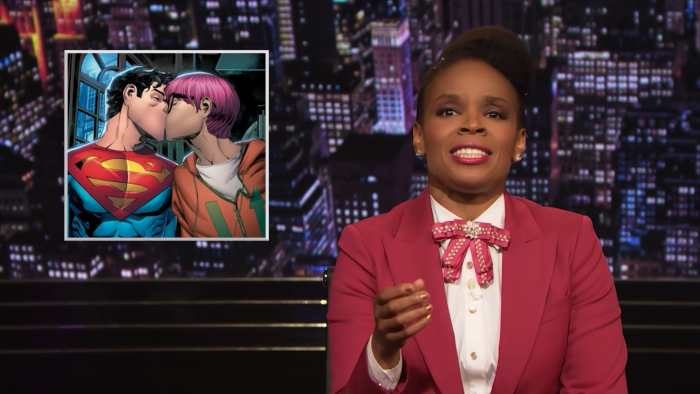 There has been a lot of discourse over Jonathan Kent, son of Clark Kent and Lois Lane, coming out as bisexual. A lot of that discourse has been depressingly ignorant. People have been complaining that Superman isn’t queer without even realizing which Superman they’re talking about. It’s annoying, but unfortunately not surprising. Luckily, Amber Ruffin is here to tell those people about themselves in a new edition of her segment Bitch Please!

Amber does not mince words. She makes a wonderful case for queer representation. In less than three minutes, she succinctly explains that this will not ruin anyone’s childhood, but will more likely help someone else’s. People need to be able to see themselves in popular characters, especially at a young age. You can’t be what you can’t see. Now, people can see themselves as Superman, which is pretty rad.

It’s also important to note that people who saw themselves in Superman before still can. Clark Kent isn’t going anywhere. He’s still very much part of the DC Universe, both on and off the screen. Stories about him, and there are many, will still exist. Forever. This change for his son does not take any of that away. As is usually the case for comics, things will just return to the status quo within a few years. A reset, as it were. That’s how comics are.

It’s wonderful that DC made this change. It’s also wonderful that someone like Amber Ruffin (and many others) came out to defend it. Decisions like this need widespread support. Like Superman not being a symbol for the underrepresented, it truly makes a difference.