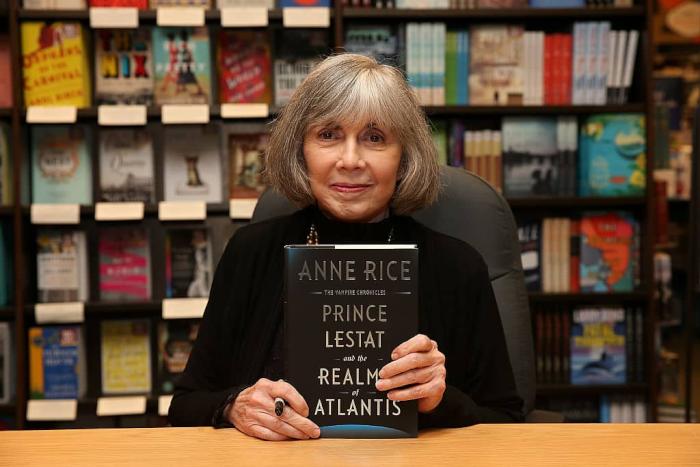 After many years in development hell, we are finally getting a lavish small-screen adaptation of Anne Rice’s Vampire Chronicles. Arguably the most influential vampire novels next to Dracula, Rice’s saga of the undead helped to dramatically rewrite the cultural understanding of vampires for generations of readers. I am a huge fan of the books, even when they get, to put it kindly, extremely odd. They had a big impact on me and, as much as I love Neil Jordan’s film adaptation (we do not speak of the other film but I will allow trash-talking of the musical), there’s so much untapped potential just waiting to be mined. So, of course, I have some things I would like to see AMC and company tackle when it comes to what very well might be my favorite book series of all time.

One of the most fascinating characters in the books who never got her dues on the big screen is Gabrielle de Lioncourt, Lestat’s mother. A beautiful noblewoman who adores her son, Gabrielle becomes Lestat’s first fledgling vampire and takes to her new undead life almost immediately. Being undead frees her from the smothering constraints of patriarchy and she has an absolute blast with it. She starts dressing in men’s clothing, chops off her hair practically every day (vampire’s hair grows very quickly), and eventually decides to live a semi-feral life in the jungle when her son becomes a total drag. In a series that has always played around with conventions of gender and societal expectations, Gabrielle’s arc is a peak for Rice’s world. Sadly, she’s not in either of the films, although she is one of like three good things about the terrible musical. The Vampire Chronicles has some fascinating female characters but not that many and expanding Gabrielle’s role would seriously benefit the wider narrative.

Louis de Point du Lac is everyone’s favorite undead mope. A deeply empathetic vampire who forever regrets his decision to become immortal, his love/hate relationship with Lestat forms an emotional backbone to the saga. He’s the first vampire we meet in the series since he’s the one being interviewed in, well, Interview with the Vampire. Oh, he’s also a slave-owner. He has two indigo plantations. This forms a pretty big part of the first novel but Rice never goes deep into the ramifications of this power dynamic and how Louis’s attitudes on owning enslaved humans may have changed throughout the centuries. This week, it was announced that Louis would be played by Jacob Anderson from Game of Thrones, a British-Afro-Caribbean actor. That offers up a fascinating new take on the character and his ties to slavery, if the show so wishes to take it. Will they?

Lestat basically decides to troll the vampire world by telling humanity all of their secrets, and he does so through rock music, theorizing that it’s the most effective way to spread the gospel and his own bratty charisma. Spoiler: it works, maybe a little too well. In the terrible film version of The Queen of the Damned, we see Lestat rocking out as a nu-metal musician, with songs provided by the lead singer of Korn, and it’s just kind of sad. Rice imagined Lestat as a Jim Morrison-esque figure, and that doesn’t square with a guy who looks like he’s two seconds away from a Limp Bizkit singalong. If you’re going to make Lestat a Rockstar, do it properly. Get St. Vincent to write the music!

Interview with the Vampire is a fascinating film that manages to be excellent despite (or maybe because of) a universally miscast ensemble. Tom Cruise is all wrong for Lestat and yet he ends up being kind of brilliant? Antonio Banderas has no business playing a forever 17-year-old redhead brat but damn he’s good as Armand. So, me getting grumpy at potentially disjointed casting seems a bit silly. We’ve all been proven wrong before. Still, these characters are so fully realized on the page that finding the right fit for them among mere mortals is a gargantuan task. Noah Reid, the Australian actor who’s been cast as Lestat, is certainly pretty, but I can’t comment on his acting. Aesthetic is hugely important to the Vampire Chronicles (us ugly people aren’t welcome, alas) but the ensemble is hugely empathetic, prone to delivering baroque monologues, and veering wildly between catatonia and operatic. Good luck getting that casting right!

The Mayfair Witches trilogy is a near-2000-page saga that takes place alongside and eventually becomes intertwined with the Vampire Chronicles. Set in New Orleans, the saga follows the Mayfair clan, a matriarchal and heavily incestuous dynasty of witches haunted by a malevolent spirit named Taltos. The first book, The Witching Hour, is a thousand pages long and, even by Rice’s standards, is bananas. I’m not even sure how you’d tackle a Southern gothic family drama with magic, inter-family breeding, hauntings, a lot of rape, and one of the more disturbing pregnancy and birth scenes you’ll see in 20th-century fiction. AMC is putting together a writer’s room for a Mayfair series, so we’ll certainly get some of the strangeness. People tend to forget how truly bonkers Rice’s work can get and I hope the new show doesn’t skimp on that. Speaking of…

Yup. Aliens. Did you know that the vampires are actually descended from the spirit of a human who was abducted by aliens? And that they performed experiments upon him so that he could help assist in their plans to destroy all human life? But instead, he created Atlantis (yes, THAT Atlantis)? But then he died when that city was destroyed, and his ghost ended up the Egyptian queen Akasha and thus created vampires? Rice didn’t introduce aliens to her world until Prince Lestat and the Realms of Atlantis and it is such a wildly unexpected rewriting of her own lore that I cannot help but respect the sheer f**king nerve of it. Keep the aliens in the TV series, you cowards!

← My Name is Giovanni Giorgio: Silly YouTube Memes Still Exist | Spoilers: Did a Big Pharma Exec Come Up with the Real Big Bad in Netflix's 'Sweet Girl'? The Hell Was That? →