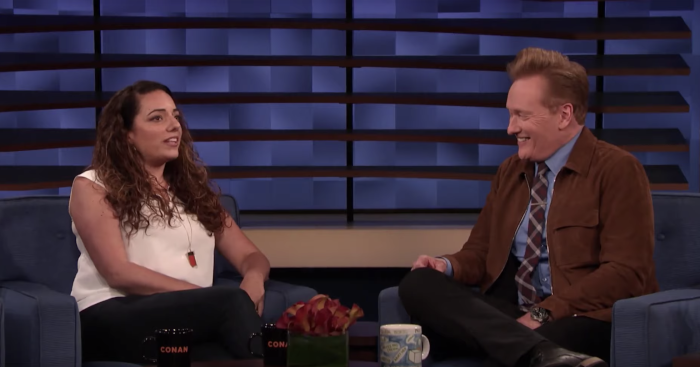 Beyond a lot of YouTube clips, I don’t think I have watched Conan O’Brien’s late-night show live in a couple of years, even after the format change. And yet, he’s probably my favorite current late night host, and he also hosts my favorite interview podcast at the moment (which I do listen to). I still listen to Dax and Maron a lot, but I particularly appreciate Conan’s podcast because he already knows most of the people who appear, he has a repartee with them, and unlike Maron and Shepard, he doesn’t go through his guests’ careers chronologically (I actually do appreciate that format from Shepard and Maron, but it’s nice to shake things up, too).

Anyway, I’ve learned a lot from Conan O’Brien Needs a Friend, like how close Conan and Lisa Kudrow are, that Andy Richter is a lot more scatological than I might have thought, and that Conan can still get a little starstruck and awkward, as he seemed to do with Hannah Gadsby, who totally controlled her interview. Also, Olyphant is just as good on the podcast as he is on the show, Mila Kunis is one of the most delightful people on the planet, and NBC once considered offering Jimmy Kimmel Conan’s job.

Anyway, if you could only choose one celebrity podcast to listen to, I think Conan’s is probably the best right now. It doesn’t hurt, either, that Conan’s podcast more regularly features his assistant, Sona Movsesian, who has been Conan’s secret weapon for the last decade. She appears frequently on his late-night show (Conan once helped her buy a car), and what’s so terrific about Movsesian is how much sh*t she gives Conan. They behave like lifelong friends who are comfortable enough to freely mock one another.

Last night on Conan’s late-night show, Kumail Nanjiani had to cancel through no fault of his own (he was stuck filming Silicon Valley), and because Conan couldn’t find anyone else last minute, he brought Sona out as a guest, who learned of this as she was coming out on stage. Conan put her on the spot, and she returned the favor, by asking him in front of a live audience to buy her a house.

It’s great, and she should be on monthly. No offense to Kumail, but she’s a better guest.

Oh, and to get Kumail back for not showing up, Conan promoted a clip not of Kumail’s movie, Stuber, but for a competing movie, The Lion King.